A Sacramento Police Department officer is under investigation after getting involved in an altercation with a suspect Monday afternoon.

A Sacramento Police Department officer is under investigation after getting involved in an altercation with a suspect Monday afternoon.

At approximately 5 p.m., according to a press release from the department, a uniformed officer attempted to detain a man who illegally crossed the street near the intersection of Cypress Street and Grand Avenue. A video of the altercation was shared on Facebook by a witness about an hour after it happened.

The officer allegedly instructed the man several times to stop, but the suspect ignored the officer’s commands and continued walking away. The two got into an argument on the street, with the man challenging the officer to fight him, according to police.

The officer then charged at the man, and “for unknown reasons” threw him to the ground and started hitting him, according to police. After a few minutes, additional officers arrived and helped subdue the suspect.

Following the altercation with the officer, the man was handcuffed and arrested for resisting arrest and an outstanding misdemeanor warrant out of Fresno County. At approximately 2:30 a.m. Tuesday, he was released from custody and issued a court date for his outstanding warrant, police say.

The SPD reviewed the officer’s dashboard camera and noted the video displays “actions and behavior that we would consider unacceptable conduct by a Sacramento Police Officer.” 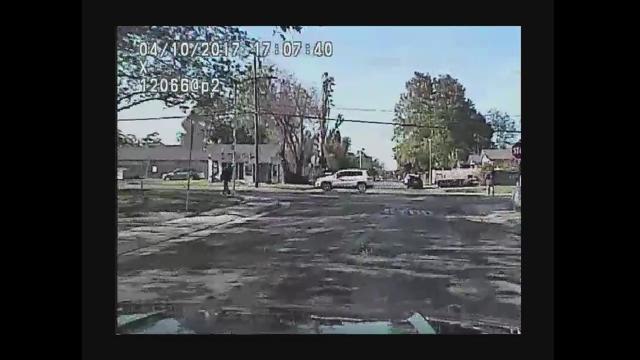 The officer involved has been placed on paid administrative leave pending the outcome of the internal investigation. As the police department reviewed further video and reports, it was also determined that a criminal investigation into the officer’s actions was also warranted, police say.

On Tuesday morning, Sacramento Mayor Darrell Steinberg issued a statement regarding this incident. He said he finds the actions of the officer, "extremely disturbing and they are not representative of the training nor the expectations we have for our Police Department."

"I also anticipate a swift and thorough investigation from our Office of Public Safety and Accountability and will be in contact with community leaders as this process unfolds,” Steinberg said.