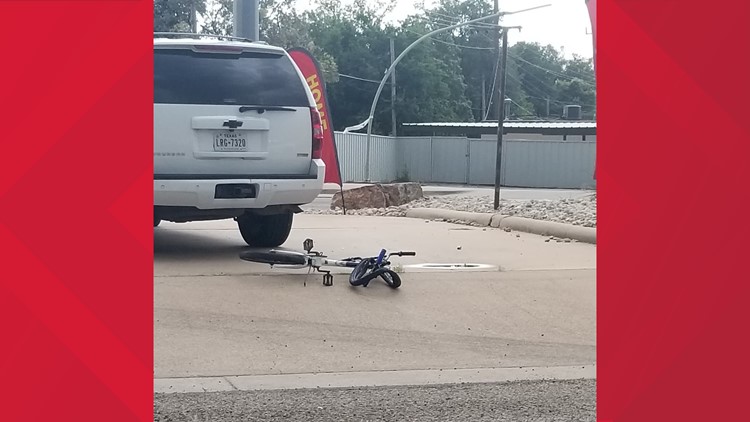 SAN ANGELO, Texas — UPDATE: The seven-year-old boy who was hit by an SUV while riding his bicycle Wednesday was airlifted to an Austin-area hospital earlier Thursday, according to the San Angelo Police Department.

ORIGINAL STORY: Just after 5 p.m. Wednesday, officers from the San Angelo Police Department were dispatched to the intersection of College Hills Boulevard and West Avenue N for a call of a vehicle versus a child bicyclist crash.

The seven-year-old child was transported by ambulance to a nearby hospital with incapacitating injuries.

SAPD Public Information Officer Tracy Piatt-Fox said there was consideration for a medical flight to transport the child to a secondary hospital, but the flight was canceled because of the weather.

A preliminary crash investigation revealed the driver of a white 2009 Chevrolet Suburban was traveling northbound in the 1800 block of College Hills when he collided with the seven-year-old boy, who was traveling across College Hills on his bicycle, from west to east.

The driver of the Suburban was identified as Jesus Martinez, 25.

Officers at the scene had reasonable suspicion to believe Martinez was under the influence of an illicit substance.

Martinez was arrested at the scene for intoxication assault. A passenger in the Suburban, Devonte Carson, 25, was arrested for possession of marijuana.

Additional charges are pending and the investigation is ongoing.

Piatt-Fox asked if anyone witnessed to the crash, please call SAPD dispatch at 325-657-4315 and let the dispatcher know you have information on the vehicle versus bicyclist crash.

Additionally, she said investigators have some video from the scene of the crash, however, the department is seeking any information from any residential or commercial surveillance footage from the 1600 to 1800 block of College Hills Boulevard from 5 p.m. to 5:06 p.m.

No further information was available from the scene.