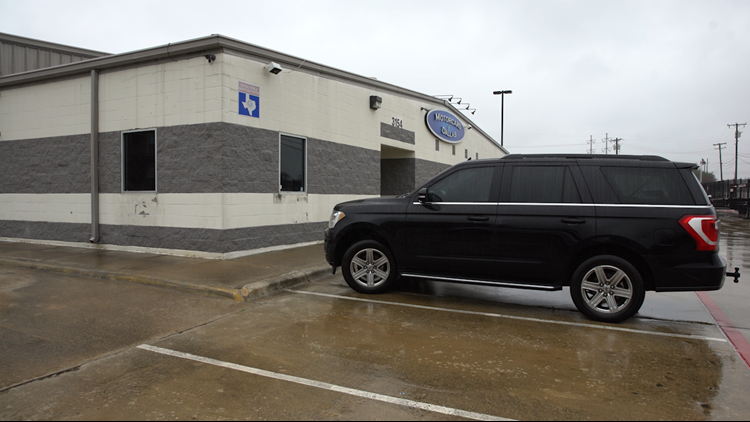 DALLAS — Terry Sanner never thought he could be scammed at a car dealership. He has owned more than 30 cars in his lifetime.

In September, he bought a 2018 Chevrolet Express service van from Motorcars of Dallas in Carrollton for his son's chimney and fireplace company.

Like Sanner's other car-buying experiences, it was a smooth process at the dealership.

But months later, Sanner still hasn't received the vehicle registration, title and license plates he paid $1,715.88 to the dealership to get.

Sanner was told at the dealership that he would receive the three items within three to six weeks of his purchase. That hasn't happened.

More than 25 people have reported similar problems, according to the Texas Department of Motor Vehicles enforcement division.

They say they paid between $1,500 to $3,000 to the dealership for the state fees but still haven't received their titles or registrations.

Sanner said he called the dealership 50 to 60 times on three different phone numbers.

"I just felt like the dealership had screwed us out of the money," Sanner said.

RELATED: How to protect yourself from scams

The dealership owner, Marty Garrison, said the business was struggling so he closed the location on Kellway Drive.

He acknowledged that he received the fees for the items but had not sent the money to the Department of Motor Vehicles.

The son of former Pro Bowl Dallas Cowboys running back Walt Garrison said he plans to make sure his customers get their car registration, title and license plates.

"It just kind of got run in the ground," Garrison said of the dealership.

The dealership currently has business signs up around the building, but there are no cars in the lot. The front door remains locked.

"We should had probably had a way for people to speak to somebody there, yes," Garrison said.

While former customers say Motorcars of Dallas was once filled with cars for sale, it is currently an empty parking lot.
Jay Wallis

Garrison claims he is selling the current Motorcars of Dallas building. He still plans to operate a dealership.

He said he plans to use the sale money to get everyone the titles and car registrations they paid for and says he will reimburse those customers the fees they've had to pay to maintain temporary license plates.

The Better Business Bureau (BBB) Serving North Texas recently moved Motorcars of Dallas to an "F" rating after a spike in complaints about unpaid fees.

"The company failed to rectify the situation and failed to respond to BBB and provide an explanation of why it's happening,"  said Phylissia Clark, the vice president of public relations and communications.

Clark said many of the people who call are worried whether they own the vehicle they bought.

She said even though car dealerships are one of the most common businesses the BBB hears complaints about, these complaints are different.

Clark also said in the past 12 months, Motorcars of Dallas has made up more than 12% of all inquiries made to the BBB about used car dealers.

"This is a significant situation, and it's a rare situation," Clark said. "We don't see this often."

Like Sanner, Lowell Schaper has tried to contact Motorcars of Dallas about his tax, title and license fees.

The Dallas resident bought a 2013 Ford F-150 and paid the dealership $1,000 in fees. He has repeatedly tried to figure out how to ensure his vehicle is properly registered but has not heard back from the dealership.

"I don't have time to deal with any of this," said the father of seven, who works and attends school full time.

Michelle Patraw drove from Oklahoma to buy a 2017 Ford Super Duty Flatbed from Motorcars, spending more than $2,200 for her tax, title and license fees.

She said she's lost at least 10 hours of work the past few months, trying to figure out how to get correct documents and plates for her car.

"I want to be able to drive my truck around legally and not worry about getting in an accident or getting caught driving it," Patraw said.

Like Patraw and Schaper, Teresa Allen believed Motorcars of Dallas was a reputable dealership.

"I always, anywhere I go, I check out ratings," Allen said. "I check out the place that I'm going to."

She purchased a Jeep for her son to drive at college in Austin.

She said she had no reason to not trust this business. Now she said she is skeptical she'll ever get what she paid for.

Teresa Allen looks over her purchase agreement for the car she bought from Motorcars of Dallas.
Jay Wallis

Many of the customers worry that the vehicles they paid for aren't actually theirs.

"The fact that this vehicle is still technically not mine just feels weird," McMaster said. "I hope it gets resolved."

Russell Day feels like his tax, title and license fees have been stolen from him when he bought a 2018 Dodge Ram from the dealership in October.

But there's little guarantee Day can get his money back.

The Department of Motor Vehicles does not have the authority to get customers' money back in cases like this, according to spokesperson Adam Shaivitz.

The DMV investigates each complaint against car dealers. The organization can sanction car dealerships by issuing fines or revoking business licenses.

It's up to customers to hire their own lawyers for any legal action, Shaivitz said.

People can file complaints with the Office of the Attorney General's consumer protection division.