VERIFY: Gas for $7.99 a gallon? Photo of customer’s receipt sets off a social media firestorm

Some are commenting that a hoaxter obviously faked the photo or the receipt. Most believe the receipt is genuine and they’re outraged. We put it to the Verify test. 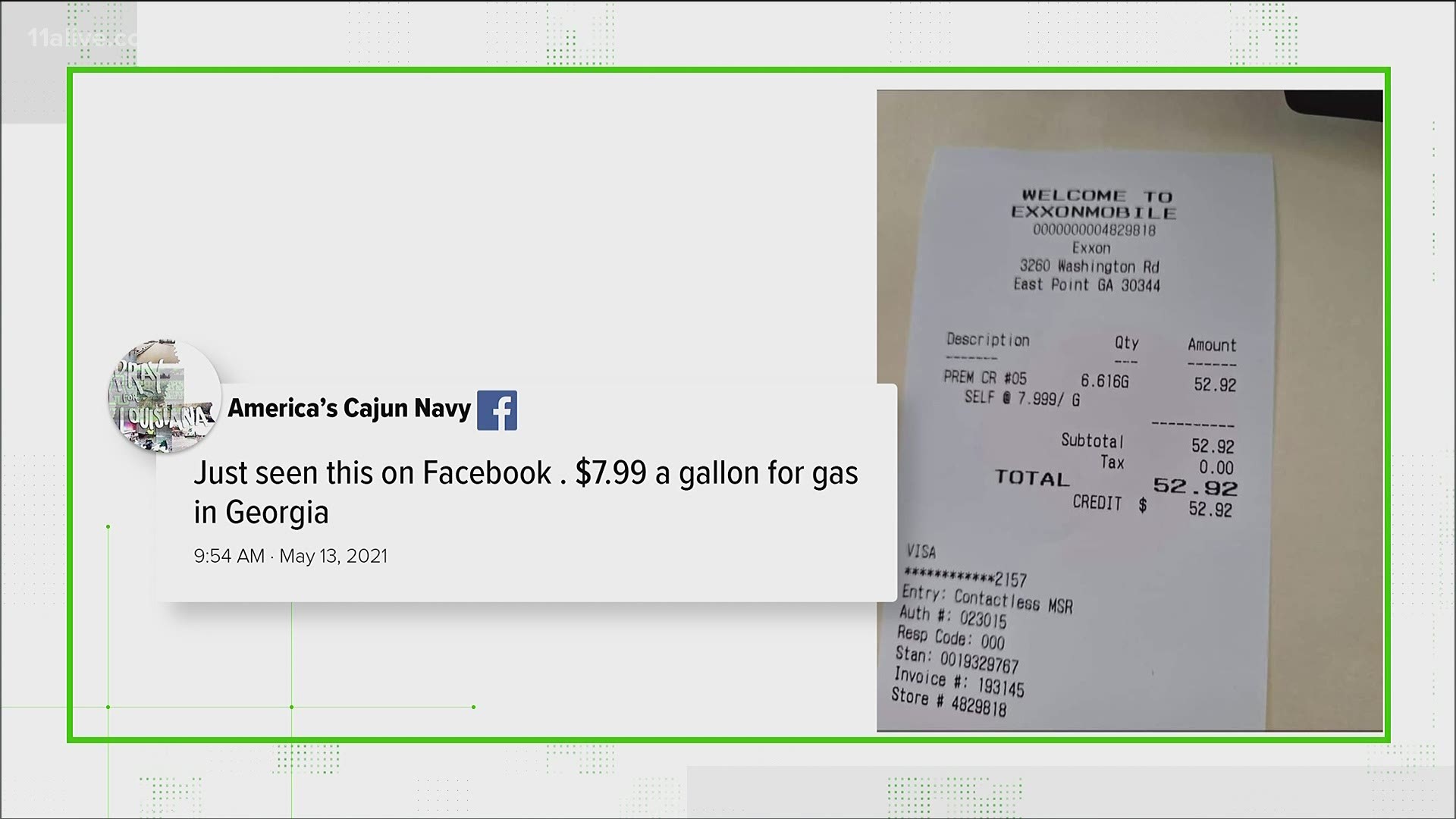 ATLANTA — 11Alive’s friends at PolitiFact tipped us off to a viral Facebook post about a gas station in East Point charging $7.99 a gallon.

A photo of the receipt, posted on Facebook, was spreading on social media faster than gasoline sales during the Colonial Pipeline shutdown.

The receipt showed that an East Point gas station was charging $7.99 a gallon for premium.

Some people on social media are commenting that the photo or the receipt was obviously faked. But most believe that what the photo shows is true, and they are outraged.

With the picture of a local gas station receipt, our Verify team set out to sort out truth from fiction.

Could the viral photo of a receipt showing $7.99 for fuel possibly be real?

Yes, the receipt does show what the gas price at one station showed at least for a period of time. But we've learned there's a bit more to the story.

First, on the receipt, ExxonMobil is misspelled as “ExxonMobile.”

ExxonMobil’s website shows that there is not an “e” at the end of the company’s name.

Next, the gas station’s address that is printed on the receipt, 3260 Washington Road, shows up on Google as the address of a restaurant, not a gas station.

We drove to the address and found New Han’s II Chinese Restaurant.

But next door to the restaurant is an Exxon gas station, at 3270 Washington Road. The business’s name is “Best 4 Less” which runs the gas station as well as a convenience store.

We bought some gas and got a receipt. And our receipt was printed, inexplicably, with the same misspelled name, “ExxonMobile,” and the same wrong address -- 3260 Washington Road -- that show up on the receipt that’s posted on social media.

We talked with the manager, M.D. Azim, who told us that earlier in the week, during the pipeline shutdown, he did set his price for premium at $7.99 a gallon. But he said it was an accident and that the premium price was supposed to be $4.99 a gallon.

He said he corrected it immediately after he realized it - within an hour.

At the time we talked with him, he was not selling any premium gas because he said he had sold out and was waiting for deliveries to resume, now that the pipeline is back in service.

Azim said he will give refunds to anyone who brings in their receipt.

So, we can Verify, for the record, that the receipt in the viral photo is real.