VERIFY: No, the National Guard is not being activated to enforce a two-week quarantine amid protests

A bogus claim the Verify team debunked in March has resurfaced, now alleging a two-week quarantine will ensue to "help prevent looters and rioters." It is false. 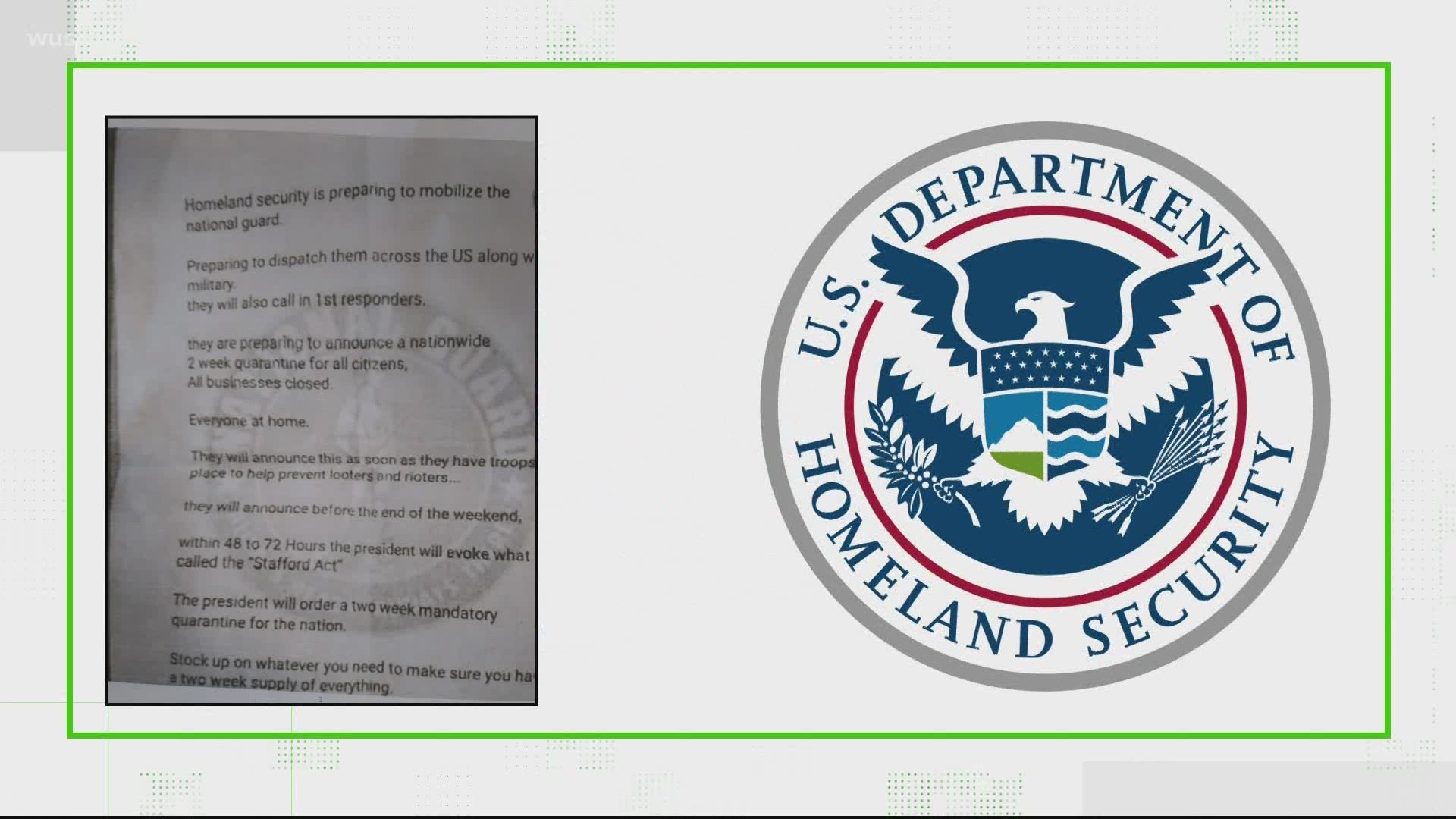 A flyer circulating online claims that Homeland Security is preparing to mobilize the National Guard and U.S. military to invoke a two-week quarantine, under something called the “Stafford Act” in an effort to “help prevent looters and rioters.” Is that information accurate?

No. The Verify team debunked a similar message in March. The flyer, which now includes information about "looters and rioters," is still false.

Letter from President Trump regarding the Stafford Act

A flyer circulating online claims Homeland Security is preparing to mobilize the National Guard and the United States military to invoke a two-week quarantine, under something called the “Stafford Act," in order to "help prevent looters and rioters."

So we're verifying if the information in this flyer is accurate.

Our team debunked the information going around in this flyer back in March when coronavirus was declared a pandemic.

President Trump already invoked the Stafford Act back on March 13, 2020. The act only really deals with FEMA and how the federal government assists states and victims. It doesn’t grant the President explicit powers to quarantine the country.

When we first tackled this claim back in March, both the National Security Council and the Chief of the National Guard Bureau called the rumor fake.

Text message rumors of a national #quarantine are FAKE. There is no national lockdown. @CDCgov has and will continue to post the latest guidance on #COVID19. #coronavirus

I hear unfounded rumors about #NationalGuard troops supporting a nationwide quarantine. Let me be clear: There has been no such discussion. ... For news about the great work the Guard IS doing to support the #Covid_19 response, click the link. #COVID19 https://t.co/JZROM4xfF9

Later that month, the National Guard tweeted the flyer with "FALSE" written across it in bold red font.

ICYMI: We continue to hear from many of you asking if certain rumors you've seen online about the National Guard are true. This message in particular keeps popping up. For the record: it is not true. Check the facts about this rumor and others here: https://t.co/CxBN8XpqVg pic.twitter.com/mAMU9gkewN

There have been a lot of rumors in the community about the potential of the President ordering a two-week quarantine and bringing in the U.S. military in light of recent civil unrest in Minneapolis and St. Paul. We want people to know that this is not true. pic.twitter.com/YtPu5oCfIm

It is true that governors have activated the National Guard in multiple states and D.C. They are there to assist state and local law enforcement amid what they call “civil unrest operations.”

That’s on par with their official duties, according to their website. Governors can activate the National Guard during "local or state-wide emergencies such as storms, drought and civil disturbances." The President also has the power to activate them.

But again, there's no evidence that they're being activated to enforce a two-week quarantine.

So we can verify that this flyer is false, and continues to spread fake information.

RELATED: VERIFY: Does DC have a cash bond?

RELATED: VERIFY: There is no evidence of a #dcblackout, yet rumors persist