The Redtails: A brief history of the better name for our Washington football team

The debate over whether the Washington Redskins should change its name has been even more heightened. 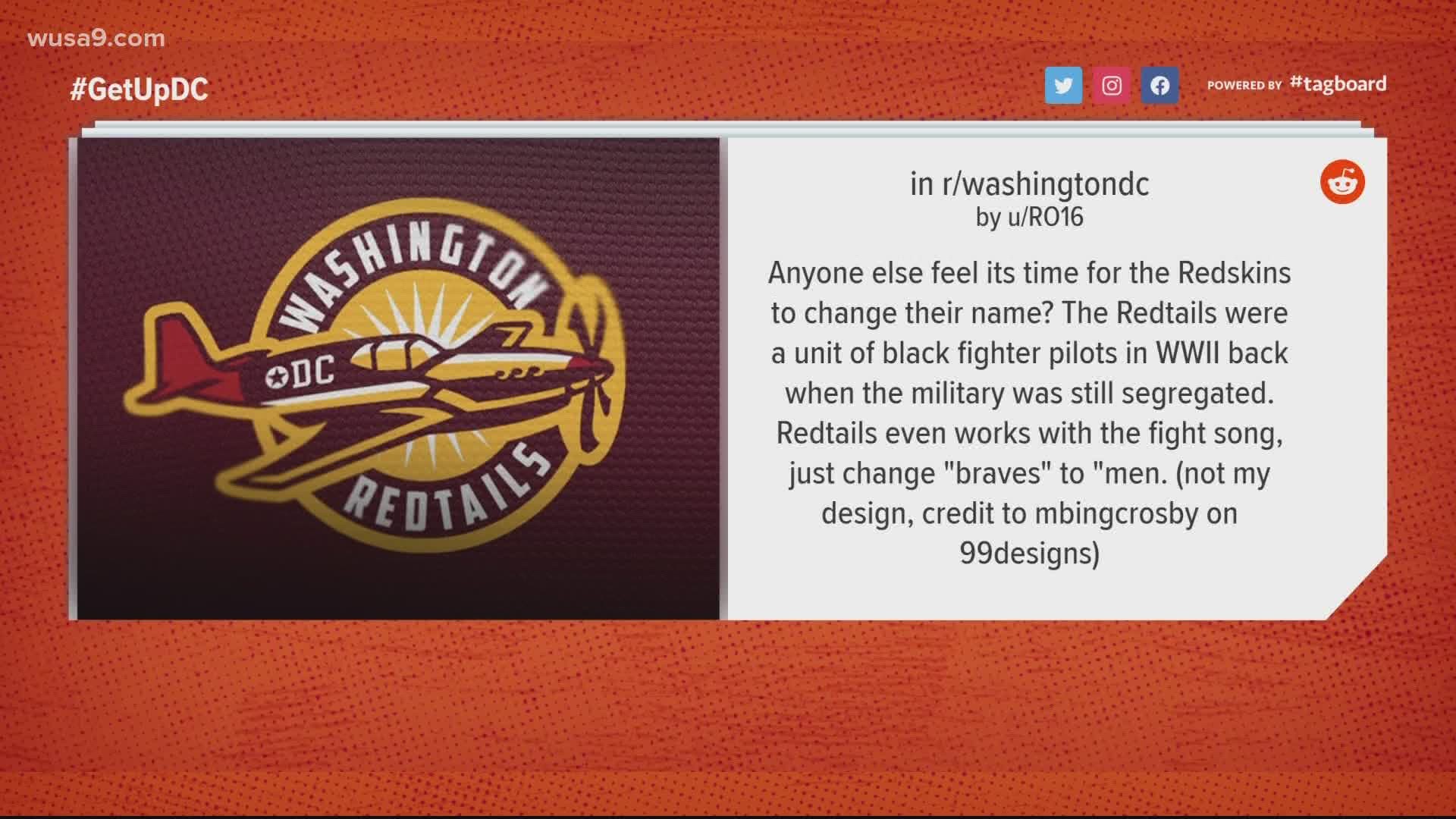 WASHINGTON — Why not rename the Washington Redskins?

Sports teams across the District are reading the room and stepping up in support of Black Lives Matter.

But in the case of the Redskins, that call for support is undermined by the team's name and its racist associations.

One particular call for a rename drawing attention came in the form of a Reddit post, suggesting an appropriate swap out would be to rename the Redskins the Washington Redtails.

A Reddit user posted an alternative logo design and team name for the Washington Redskins last week – and the conversation has gotten a lot of attention.

User RO16 writes, "Anyone else feel its time for the Redskins to change their name? The Redtails were a unit of black fighter pilots in WWII back when the military was still segregated. Redtails even work with the fight song, just change "braves" to "men.”

RO16 credits mbingcrosby on 99designs for creating the logo design and notes that the team could seize the moment and replace their controversial team name with an equally tradition-rich nickname.

So Who Are The Red Tails?

The Redtails, according to historians, were a unit of Black fighter pilots in World War II – back when the military was still segregated. The Redtails, otherwise known as The Tuskegee Airmen, is the nickname of the first Black unit to fly combat airplanes during World War II.

During the 1920s and 1930s, record-setting pilots like Charles Lindbergh and Amelia Earhart had dominated the nation, and thousands of young men and women wanted to follow in their footsteps.

RELATED: Here's an alternative name, logo for the Washington Redskins | Most DC Thing

However, young Black Americans who aspired to become pilots were met with significant obstacles, starting with the racist belief that Black people could not learn to fly or operate sophisticated aircraft.

At the time, racial segregation remained the rule in the U.S. armed forces — as well as much of the country. Much of the military establishment, particularly in the South, believed that Black soldiers were inferior to whites and performed poorly in combat.

RELATED: 100-year-old Tuskegee Airman from Bethesda honored at State of the Union after being promoted to Brigadier General

In February 1944, the pilots of the 332nd began flying P-51 Mustangs to escort the heavy bombers of the 15th Air Force during raids deep into enemy territory. The tails of their planes were painted red for identification purposes, earning them the nickname “Red Tails.”

The Red Tails: A brief history of the better name for Washington's football team

1 / 5
ASSOCIATED PRESS
Second Lt. Gabe C. Hawkins, second from right, an Army instruction teacher, looks over a map before taking his students on a cross-country trip at Tuskegee, Ala., on Sept. 5, 1942. The cadets are being trained to join the first black combat unit in the U.S. Army Air Corps. (AP Photo)

While the Red Tails were the best-known of the Tuskegee Airmen, Black aviators also served on bomber crews in the 477th Bombardment Group, which was also formed in 1944.

Later, the Air Force honored the famed group of airmen with the naming of its new trainer jet.

The 2012 movie "Red Tails" featured a star-studded cast, including Cuba Gooding, Jr. and Terrence Howard. While the characters in the film are fictional, they are based on real individuals.

Ok, so are the Redskins going to change their name?

While many of the Redditors offered other alternatives to the Redskins' nickname – for years, people have pointed out that the mascot is a racist reference to Native Americans – few challenged the idea that it should remain the same.

The debate over whether the Washington Redskins should change its name is almost as battle-tested as D.C. statehood.

And in 2015, Eleanor Holmes Norton, D.C.'s delegate to Congress, introduced a bill to remove the NFL's antitrust exemption if the Washington Redskins did not change their nickname.

A University of California, Berkeley study published in February 2020 in the journal of Social Psychological and Personality Science, said that at least half of Native Americans surveyed are offended by the team’s nearly 90-year-old name.

The authors go on to call out a previous Washington Post survey, and other previous surveys, as "questionable," arguing that things don't add up when it comes to the number of people that weren't offended by the team's name.