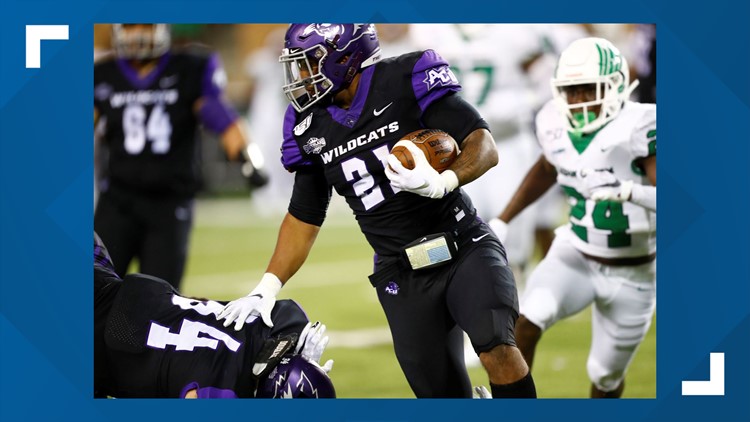 DENTON, Texas — Abilene Christian University football team can take a lot from the season-opening loss to North Texas. The Wildcats came up short in the 51-31 loss but there is a lot more to this score.

The Wildcats can see potential in the offensive backfield with the senior running back duo. Tracey James and Billy McCrary are players to watch for the rest of the season. The two players racked up 257 all-purpose yards with three touchdowns combined.

McCrary netted 79 yards on eight carries, including a 69-yard touchdown sprint late in the third quarter, while James, a Dallas native, ran for 109 yards on 16 carries (6.6 yards per game) and broke the Mean Green's shutout bid with a 19-yard touchdown run that came with 1:15 before halftime. McCrary also had a memorable season opener in 2018 vs. Baylor, which included a 75-yard dash.

North Texas' Heisman Trophy watch list quarterback Mason Fine finished the victory for the Mean Green with 28 completions on 37 attempts with four TDs and one interception. Adonis Davis had the interception for the Wildcats, which was a big feat after Fine only had five interceptions for the entire season last year.

Abilene Christian quarterback Luke Anthony had over 70% completion in the air with one touchdown for the Wildcats.

"That's a real good football team (North Texas)," ACU head coach Adam Dorrel said after the game, "and we're going to build off what we did tonight in the second half (outscoring the Mean Green 21-13). We played some real good football, and did what we set out to do. We had the one turnover, but no real stupid penalties."

The Wildcats outscored the Mean Green in the second half 21-13, but it was not enough to overcome North Texas' 38 points scored in the first.

North Texas has won the last seven meetings with Abilene Christian with this being the first matchup since 1994.

The Wildcats return to action next Saturday, Sept. 7 with a 6 p.m. home opener vs. Arizona Christian.