Madden San Miguel was named after the Madden video game. His nickname is Baby Gronk. And he just started 2nd Grade. 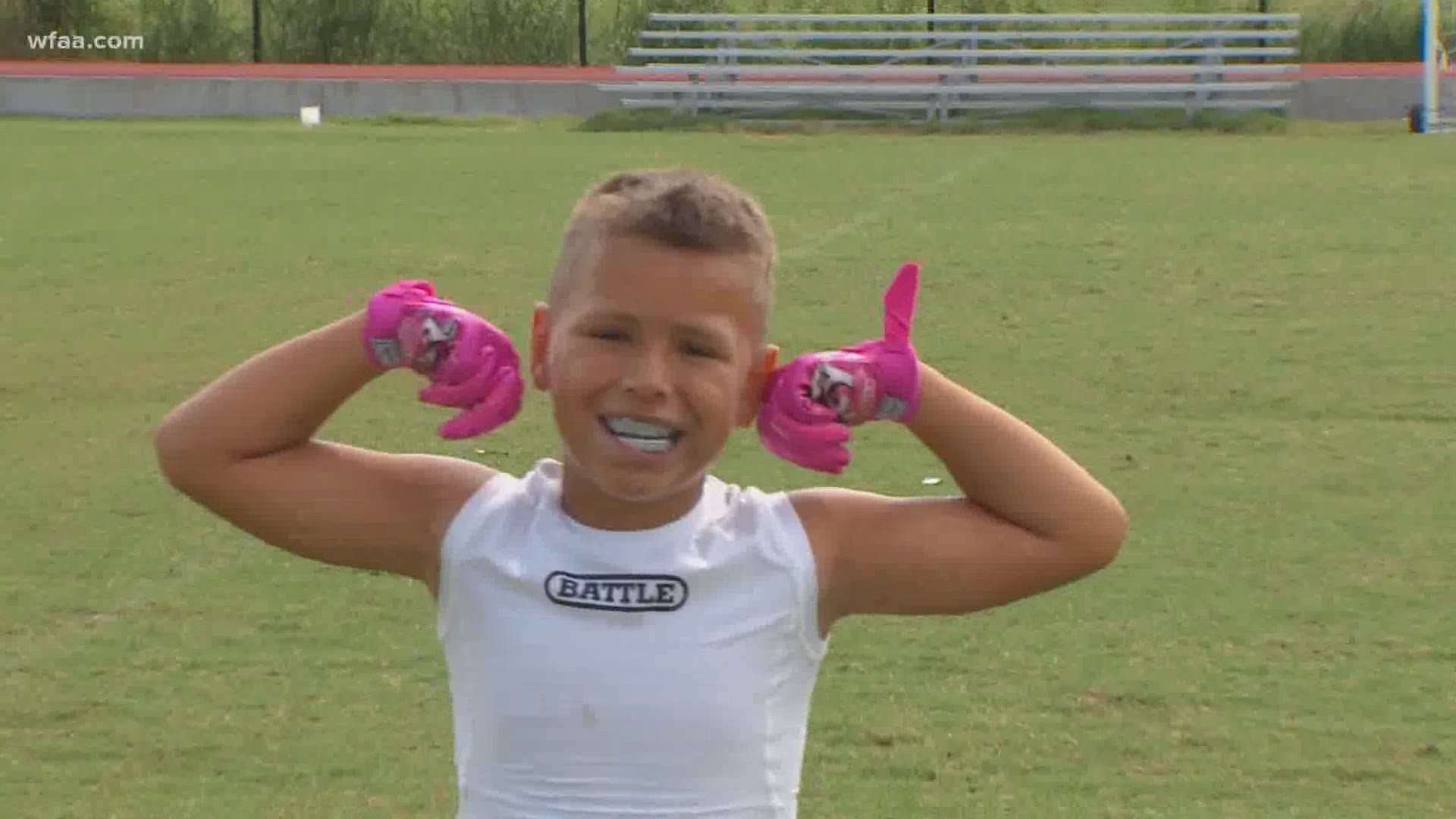 He went viral for pulling a pickup truck.

And he has 108,000 followers on Instagram, including Dallas Cowboys star running back Ezekiel Elliot -- Madden's favorite player.

Born near Cowboys Headquarters in Frisco, Madden lives on the football field.

"Helluva athlete, man," praises six-time Pro Bowl cornerback Aqib Talib. "I actually coached against him last spring in a spring league. He tore us up."

If you're wondering if that's normal or not, it's super not.

He's in the 99th percentile for his age group.

When you see him outsize and outrun many of his teammates and opponents, you realize why Madden's nickname is "Baby Gronk" -- an homage to Tampa Bay Buccaneers tight end and New England Patriots legend Rob Gronkowski.

Jake wears many hats as a parent, including advising Madden on his nutrition and training regimen.

"Ladder drills, running, footwork," Madden explained what drills he does with his dad. "I started [playing football] when I was in pre-school."

Madden trains with Josh Hicks at A+D1 Training in Carrollton, which is owned by Talib. Hicks is one of the premier running back trainers in the country, working with dozens of NFL athletes.

Madden's growth spurt is no match for the growth of his fan base.

His online presence has opened doors to collabs with other IG celebs and getting to test some of the game's hottest equipment like the Monarc football machine.

Madden's internet fame landed in the hands of the rapper Boosie. In May, Madden signed to Boosie's Syndicate Marketing and Sports Management.

"I just signed Baby Gronk," Boosie said on an Instagram Live. "He run so fast. Baby Gronk a superstar."

According to Madden's manager, they signed him as a celebrity/entertainer.

"He's a celebrity," Jake asserted. "Baby Gronk is a brand."

How does Jake balance Madden's following and attention, while still letting him be a kid?

"His mom," Jake noted. "His mom [Elizabeth] is the balancer... Madden knows that if he doesn't work hard right now, he's going to have to work a lot harder when he's older. They say, 'Let kids, be kids.' Well, if they have no work ethic, no discipline, no routine, no structure in them, most likely they'll be kids for awhile."

Madden is a sports addict. Football is number one, but he also plays soccer, baseball and likes to swim. And he's a big brother to his sister, Maguire.

"Instagram and the social media shows just one side of him," Jake said. "There's a lot more to him. We're trying to make him a well-balanced person. Not just football but education. In school, he's the class president."

A decade from now, Madden will be a high school senior playing under the lights.

What does Madden want to be when he "grows up?"