The Eagles' defense only allowed a total of 49 points in the past two games combined. 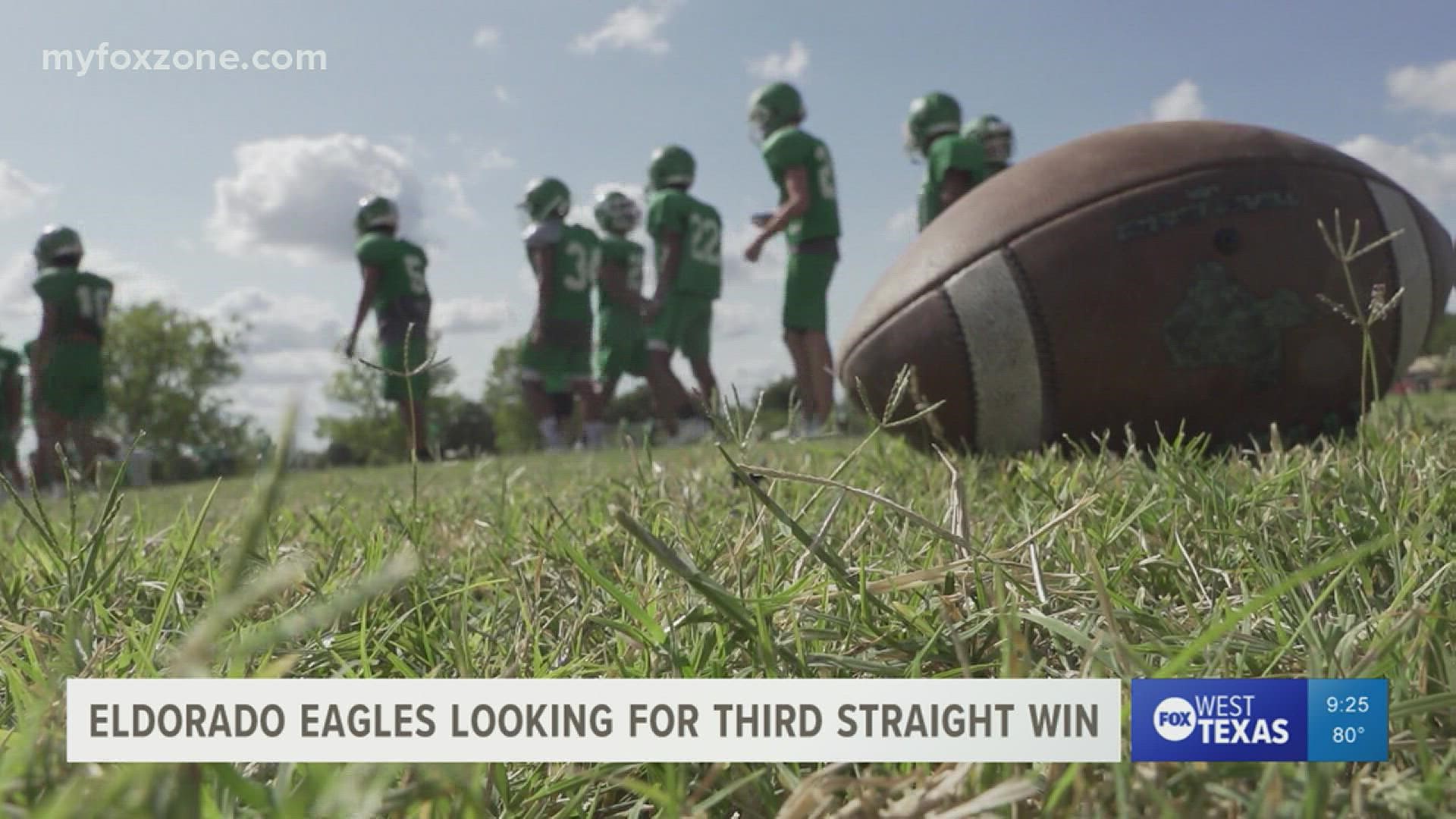 ELDORADO, Texas — The Eldorado Eagles are looking like the hottest team in West Texas after coming off a mini-bye week because Winters forfeiting because of COVID-19.

Eagles head coach Jon Long was worried the time off would slow his team down, but Friday against the Coahoma Bulldogs it was all gas, no brakes. The Eagles scored 59 points and a big part of all that scoring was slot receiver Santiago Hernandez

“It's just so much fun to see everybody score,” Hernandez said. “I love when my teammates score. I love when I score. The best part is whenever we get to compete with each other and  acknowledge each other.”

Hernandez and the rest of the Eagles understand Long's way of coaching.

It’s not a hard game plan, but it is all about being able to execute and understand your assignment and the game plan every week.

“Yeah, we like to play to our strengths,” Hernandez said. “If I can get there, we're going to make our offensive line block all night long in order to improve the running game and passing game. Whatever it is, they're going to do it just because the coach knows we can do it. So we go out there and we play our game. It works every time.”

On the defensive side of the ball, the Eagles are all over the field, being the physical team. The defense has only allowed a total of 49 points the past two games and part of that angry Eagles’ defense is defensive tackle Sam Griffin who loves to make big plays for the Eagles and it is a feeling Griffin loves every Friday night.

“Nothing really can compare to the adrenaline rush you get out of that,” Griffin said. “All your boys coming up and telling you great job, nothing can compare to that. It makes you want to get it again and that just makes you love the game even more and it makes you just want to go out there and do it again.”

What really makes the Eagles one of top teams in West Texas goes way beyond the X's and O's of the game of football. These players are more than just teammates, they are a family. A family who gives it all for one another everyday Friday night.

“Man, it's good,” Griffin said. “It's just like you're playing with family members and you're just so close together. It's like you're just playing for your brother next to you. So you just want to fight for them and protect them just as much as you would anybody else important to you in your life. That's what's great about this team.”

When the Eldorado Eagles travel to take on Wink, they are ready to put on a show and continue their winning ways to go to 3-0.

“We can expect consistency, reliability, everything on the table, and you can expect contact,” Hernandez said. “There’s going to be a lot of hits every time. Every time we get on the floor, somebody's going to get lit up. You can always expect to do it from the Eagles.”