Tiger Woods' agent confirmed that the golf star was taken to the hospital Tuesday morning and is undergoing surgery after a rollover crash in the Los Angeles area. 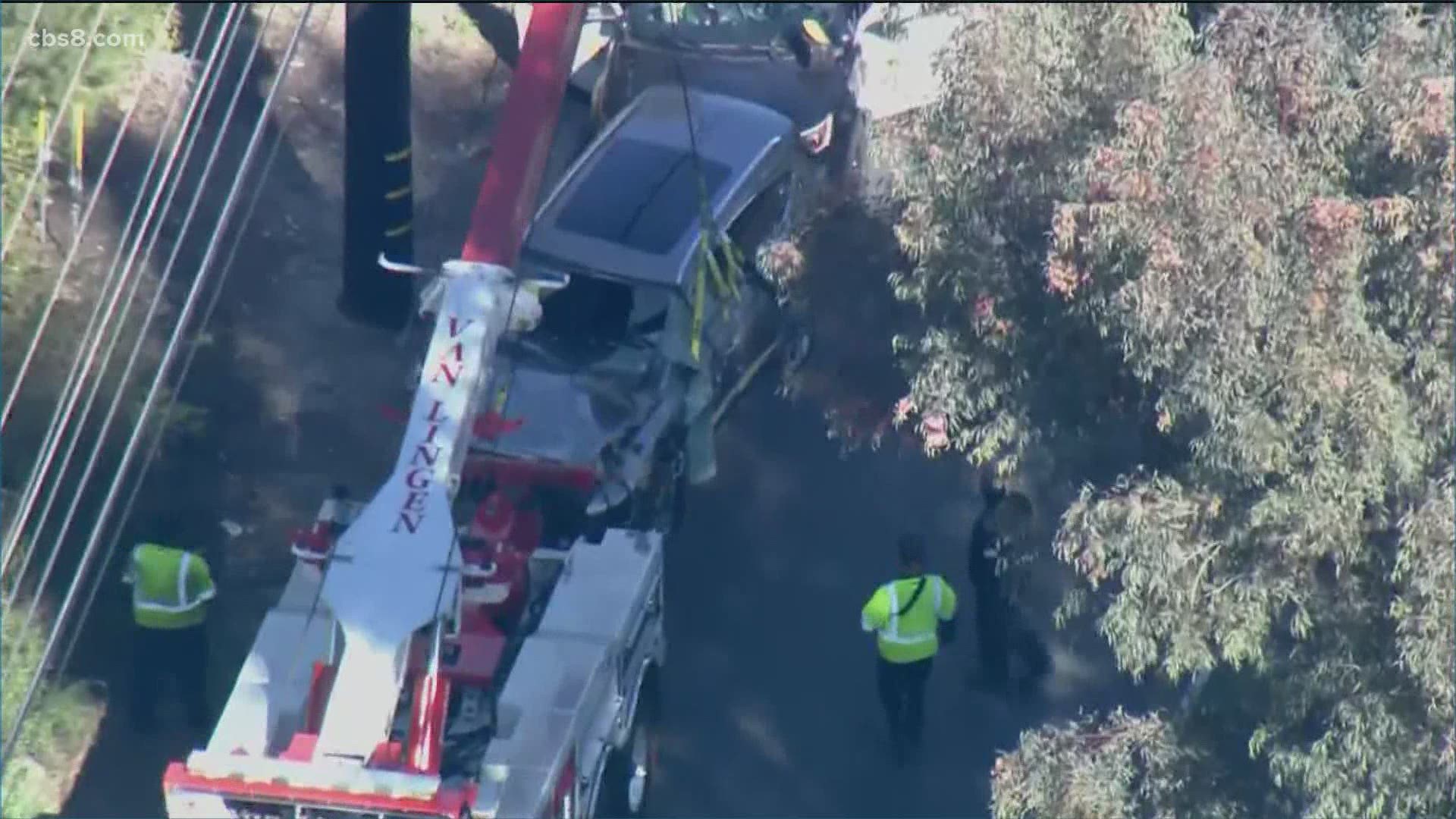 LOS ANGELES — Tiger Woods, one of the most famous and recognizable professional golfers in the world, suffered major leg injuries today when the SUV he was driving struck a center divider in Rancho Palos Verdes and careened across the roadway, striking a tree and rolling over, landing on its side in some brush.

The crash was reported at 7:12 a.m. on Hawthorne Boulevard at Blackhorse Road, according to the Los Angeles County Sheriff's Department. Sheriff Alex Villanueva said a resident in the area called 911 after hearing the collision.

Woods, 45, was the sole occupant of the SUV, and no other vehicles were believed to be involved in the crash. He was pulled from the wreckage by Los Angeles County firefighters and paramedics, then taken to Harbor-UCLA Medical Center by ambulance.

A statement was released via Twitter on Tuesday evening stating that "he is currently awake, responsive, and recovering in his hospital room" at Harbor-UCLA Medical Center.

According to the county Fire Department, Woods was listed in serious but stable condition when he was taken to the hospital. In a statement to various media outlets, Woods' agent Mark Steinberg said, "Tiger Woods was in a single-car accident this morning in California where he suffered multiple leg injuries. He is currently in surgery and we thank you for your privacy and support."

Los Angeles County Fire Chief Daryl Osby said Woods suffered "serious injuries to both legs." Woods was conscious when crews arrived on the scene, and fire crews used a pry-bar and an ax to remove him from the heavily damaged vehicle, Osby said.

The cause of the crash remained under investigation, although Villanueva said there was no immediate evidence that Woods was impaired in any way. He said the investigation would determine if Woods may have been on a cell phone or distracted in any way. It was unclear if he had been speeding, although Villanueva noted that the vehicle, which was being driven northbound on Hawthorne in a particularly accident-prone area due to the curving downhill roadway, traveled "several hundred feet" after striking the center median.

That distance indicates Woods was "going at a relatively, a greater speed than normal," the sheriff said. "However, because it is downhill, it slopes and it also curves, that area has a high frequency of accidents. It is not uncommon."

He said there were no skidmarks or other signs of braking, and the first object the vehicle struck was a sign in the center median that said "Welcome to Rolling Hills Estates." The vehicle then crossed all the southbound lanes, sheered off a tree and rolled over. He credited the safety features in the 2021 Hyundai Genesis SUV for likely saving Woods' life.

The SUV -- which suffered major front end damage -- had a logo on its side from The Genesis Invitational golf tournament, which Woods hosted over the weekend at the Riviera Country Club, suggesting the SUV was a courtesy vehicle provided by the tournament.

The exact extent of Woods' leg injuries was still unknown, although Osby during an afternoon news briefing made reference to him suffering "broken legs and lacerations."

"The fact of the matter is he was in serious condition but he was stable enough to transport to a trauma center," Osby said. "If the injuries were more dramatic and they (responding crews) couldn't control an airway, then they would have transported him to the nearest facility. But the fact that he was stable enough to be transported to a hospital further away -- which is the most appropriate hospital to be transported (to) because of the nature of the injuries, the nature of the incident -- says that it was very serious injuries, he met trauma center criteria but it wasn't so serious that he needed to be transported to the nearest hospital for immediate life-saving procedures."

Credit: AP
A vehicle rests on its side after a rollover accident involving golfer Tiger Woods along a road in the Rancho Palos Verdes section of Los Angeles on Tuesday, Feb. 23, 2021.

Sheriff's Deputy Carlos Gonzalez, the first person to arrive on the scene, said Woods was "calm and lucid" while trapped in the wreckage.

"Mr. Woods was seated in the driver's seat. I made contact with him and I ensured that he was able to speak to me. At that time he seemed as though he was still calm and lucid. ... I kept Mr. Woods calm until L.A. County fire arrived at the scene."

Gonzalez said he asked the driver, who was wearing a seat belt, for his name.

"He told me his name was Tiger, and at that moment I immediately recognized him," Gonzalez said. "I asked him if he knew where he was and what time of day just to make sure he was oriented. He seemed as though he was lucid and calm.

"He didn't seem concerned about his injuries at the time, which is not uncommon in traffic collisions. Many times people tend to be in shock. It's a traumatic experience. So it's not uncommon for people to be focused on unimportant things, or even if they are in pain they might not feel it until much later."

Gonzalez said he was wearing a body camera that was turned on per department policy during his contact with Woods. He also reiterated that the stretch of road where the crash occurred can be particularly treacherous, referring to it as a "hot spot for traffic collisions as well as speed."

"The nature of his vehicle, the fact that he was wearing a seat belt, I would say it greatly increased the likelihood that it saved his life," Gonzalez said.

He said the speed limit in the area is 45 mph, but he has seen motorists traveling at 80 mph in the stretch.

Sheriff's officials said another traffic crash occurred in the area while investigators were responding to Woods' accident, likely the result of people trying to get a look at the original wreck. No injuries occurred in that second accident.

Tiger Woods joined Jim Nantz in the booth and spoke about his recovery from back surgery. pic.twitter.com/3TyTHgRFPA

Following the weekend golf tournament, Woods had remained in the Southland to participate in a two-day promotional shoot with Golf Digest and Golf TV at Rolling Hills Country Club, where he was reportedly headed this morning for a second consecutive day of filming.

He was photographed at the course Monday with retired NBA star Dwyane Wade and comedian David Spade.

"We have been made aware of Tiger Woods' car accident today. We are awaiting further information when he comes out of surgery. On behalf of the PGA Tour and our players, Tiger is in our prayers and will have our full support as he recovers."

Other celebrities from the sports and entertainment world quickly send their well wishes.

Lakers legend Magic Johnson tweeted: "Everyone send your prayers out to Tiger Woods! He was just in a bad car accident. Let us all pray for his speedy recovery."

Retired Major League Baseball star Alex Rogriguez tweeted: "Praying for my brother @TigerWoods as we all anxiously await more news. Thinking of him and his entire family."

Golfing legend Jack Nicklaus wrote, "Barbara and I just heard about Tiger's accident, and like everyone else, we are deeply concerned. We want to offer him our heartfelt support and prayers at this difficult time. Please join us in wishing Tiger a successful surgery and all the best for a full recovery."

Golfer Justin Rose tweeted: "Just seen the awful news. We know how tough you are, we've seen it a hundred times. Hoping and praying you're ok my friend."

And actress Jada Pinkett Smith tweeted: "Prayers up for the GOAT @TigerWoods who was in an accident this morning. Was just with him yesterday. Don't take not even a MOMENT for granted! I know you're good because your Tiger within is a beast!!!"

Woods, a Cypress native who has battled back issues in recent years, last competed in a golf tournament on Dec. 20, at the PNC Championship in Orlando. He subsequently had surgery to remove a pressurized disc fragment that was pinching a nerve, his first surgery since undergoing a spinal fusion in April 2017.

Woods came back from that operation to win the 2019 Masters, his 15th major title, second only to Jack Nicklaus' 18.

On Sunday, Woods told CBS' Jim Nantz that he was scheduled to have an MRI and would await the results to determine when he could begin training for a return to competition.

Woods has been involved had two other high-profile auto incidents. In November 2009, he crashed his SUV into a fire hydrant outside his Florida home and suffered minor injuries. In 2017, he was found asleep in a vehicle in Jupiter, Florida, and was found to have multiple painkillers and sleeping aids in his system. He subsequently entered a diversion program.