Check out live score updates and the latest highlights from the Valero Alamo Bowl featuring Texas vs. Colorado here. 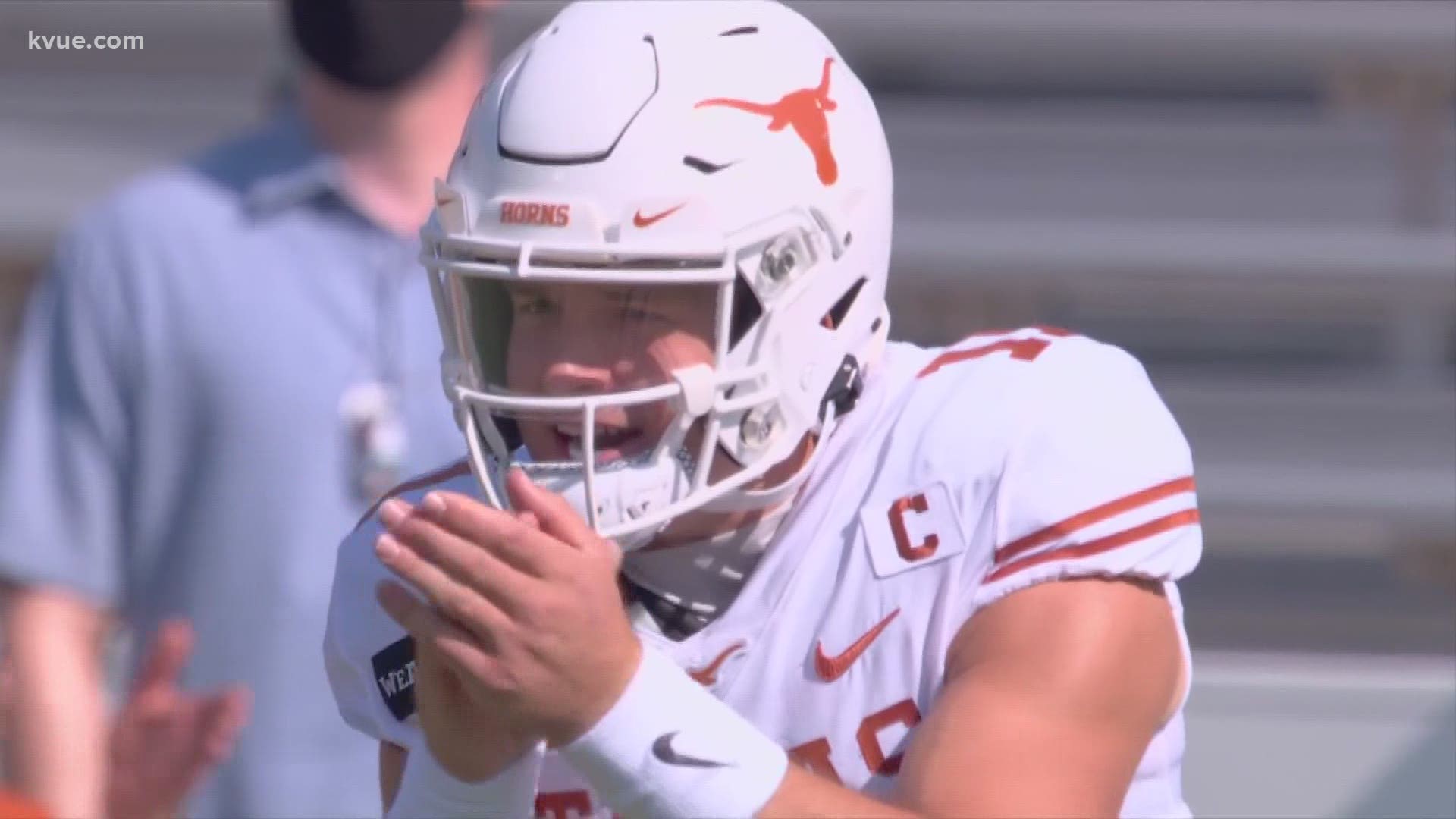 SAN ANTONIO — Editor's note: To find out how to listen to and stream the Alamo Bowl, click here.

Texas shot out to a hot start in the beginning of the ball game. UT scored two touchdowns in the first quarter courtesy of true freshman running back Bijan Robinson.

Texas, for some unexplainable reason, went away from Robinson and the offense faltered during the second quarter. Sam Ehlinger, who went 10-for-16, 160 yards and one passing touchdown, was ruled out at halftime with a shoulder injury. Casey Thompson filled in valiantly for Ehlinger, though. After a 66-yard run from Robinson on the first play out of halftime, Thompson found Joshua Moore for a 13-yard touchdown. Moore and Thompson would connect for another touchdown later, too.

By the end of the night, Thompson ended the game with four touchdowns and 170 yards on 8-for-10 passing. The star of the night, however, had to be Robinson. The true freshman running back ran for 183 yards on 10 carries, and caught two passes for 37 yards and two receiving touchdowns. Robinson gained 18.3 yards every time he touched the ball.

Texas' defense helped the Longhorns gain that early lead after picking off Sam Noyer twice in the first half.

Robinson was named the offensive MVP of the Alamo Bowl.

With the bowl win, the Longhorns are 4-0 in bowl games during the Tom Herman era. UT finishes the 2020 season with a 7-3 record.

Key moments/plays: Gabriel Watson ran the ball out for the Longhorns. UT kneeled it out to end the game.

Key moments/plays: Brendon Lewis threw a deep pass, which fell incomplete but drew a pass interference penalty. Lewis completed a 16-yard out route to K.D. Nixon. Nixon caught another screen pass for nine yards to the Texas 16-yard line. Lewis took a shot for the end zone and drew another pass interference. Lewis capped off the drive with a two-yard rushing touchdown.

FEED THIS MAN! Bijan Robinson with his 3rd TD of the day 🤘@Bijan5Robinson pic.twitter.com/YT4c5uReI3

Key moments/plays: Jordan Whittington ran for 20 yards on a reverse and a penalty on Colorado tacked on more yardage for Texas. A 10-yard screen pass to  Al'Vonte Woodard ended the third quarter.

Key moments/plays: Casey Thompson gained 22 yards on a quarterback draw. Bijan Robinson followed up with a 21-yard run up the middle. Texas' drive was stopped with a sack on third down. Dicker hit the 35-yard field goal.

Key moments/plays: Sam Noyer completed back-to-back passes for seven and 11 yards. A defensive holding penalty moved the ball 10 more yards. A six-yard run from Noyer and three-yard run by Jarek Broussard set up fourth and one at Texas' 28-yard line. Noyer did a quarterback sneak for a first down. Evan Price missed the 37-yard field goal.

Key moments/plays: Casey Thompson enters the game for Sam Ehlinger at quarterback. Ehlinger is out for the rest of the game with a shoulder injury. Bijan Robinson started the second half with a 66-yard run. Thompson threw a 13-yard touchdown pass to Joshua Moore on the next play.

Bijan showing once again that he is good at football 🏈 #HookEm pic.twitter.com/KVgXKWzNhg

Result: End of first half.

Key moments/plays: Sam Noyer returned at quarterback for Colorado. Noyer opened the drive with a 17-yard completion to Daniel Arias. Noyer had Arias open deep on the next play, but overthrew him. Noyer scrambled for 15 yards to the Texas 43-yard line. Noyer followed up with a 28-yard pass to Dimitri Stanley. Colorado called a timeout with 1:33 left in the second quarter on Texas' 15-yard line. Noyer had Matt Lynch in the end zone, but the pass was dropped. Texas sacked Noyer on third down. Evan Price hit the 40-yard field goal.

Key moments/plays: Sam Ehlinger found Jordan Whittington for 34 yards and Cade Brewer for another 38 yards. In those two plays, Texas got to the Colorado 21-yard line. Ehlinger was sacked on back-to-back plays to drive the offense back to the 35-yard line. Cameron Dicker hit the 52-yard field goal.

Key moments/plays: Brendon Lewis replaced Sam Noyer at quarterback. Lewis rushed for seven yards on his first play. Jarek Broussard ran for 13 yards to the Texas 30-yard line. Lewis completed a pass to Dimitri Stanley for 26 yards. Texas' defense stood tall on second and third and goal. Jarek Broussard punched in from two yards out on fourth and goal.

Key moments/plays: Colorado drove to their own 45-yard line but were stopped by the Texas defense.

Key moments/plays: Roschon Johnson started the drive with a loss of seven yards on first down. Back-to-back incompletions led to a field goal attempt by Cameron Dicker. Dicker missed the 45-yard field goal and UT did not take advantage of the short field.

Key moments/plays: Jarek Broussard rushed for gains of seven and 17 yards to bring the Buffaloes offense to midfield. Colorado stalled at midfield and punted the ball away.

Key moments/plays: Bijan Robinson ripped off a 50-yard run up the middle to the Colorado 27-yard line.

Bijan is good at football 👀 pic.twitter.com/TqlRk65EKa

Two plays later, Sam Ehlinger hit Robinson on a screen for a touchdown.

Key moments/plays: Jarek Broussard got no yards on a first down carry and then Sam Noyer converted on third and long to Maurice Bell for 26 yards. Two plays later, Noyer was intercepted by DeMarvion Overshown.

Key moments/plays: Roschon Johnson gained a first down on three straight carries, but UT's offense was stopped on downs after going for it on fourth and short on Colorado's 39-yard line.

Key moments/plays: Bijan Robinson opened the drive with a 27-yard run around the left end. Sam Ehlinger completed his first pass to Joshua Moore for 39 yards. Two plays later, Robinson punched it in for the first touchdown of the game.

Key moments/plays: Texas started the game stout on defense by forcing a three-and-out on the opening drive.

The Texas Longhorns will play the Colorado Buffaloes in the Valero Alamo Bowl in San Antonio. The game will kick off at 8 p.m. on Tuesday, Dec. 29, on ESPN.

This is the second year in a row that Texas will play in the Alamo Bowl. In their last appearance, the Longhorns beat the Utah Utes, 38-10. The team has played in the Alamo Bowl five times, four of those since 2012.

Everything you need to know:

This will be Texas’ 57th bowl game appearance, the second-most in the country behind Alabama. The Longhorns are 30-24-2 all-time in bowl games, with a 3-0 mark under Head Coach Tom Herman and a 3-1 record in Alamo Bowl appearances.

As the Texas Longhorns accepted an invitation to play in its second-straight Alamo Bowl, UT fans have to wonder if this bowl game will be the last time they'll see senior quarterback Sam Ehlinger don the burnt orange and white.

Ehlinger has not officially announced a decision on whether or not he would return for an unprecedented fifth year as UT's starting quarterback – which he technically could do because of a COVID-19-related eligibility waiver for student-athletes in 2020. Essentially, this entire season is a free year of eligibility for NCAA student-athletes and does not count toward their four years.

The writing seems to be on the wall that Ehlinger will not return in 2021 after comments from head coach Herman alluded that the quarterback would be leaving.

Last season in the Alamo Bowl, Ehlinger was selected the offensive MVP after accounting for 278 total yards and four total touchdowns.

A Gift from Gunderson: Moved by the generosity of Longhorns fan Wes Laurel, Nate Gunderson gifts him a replacement helmet