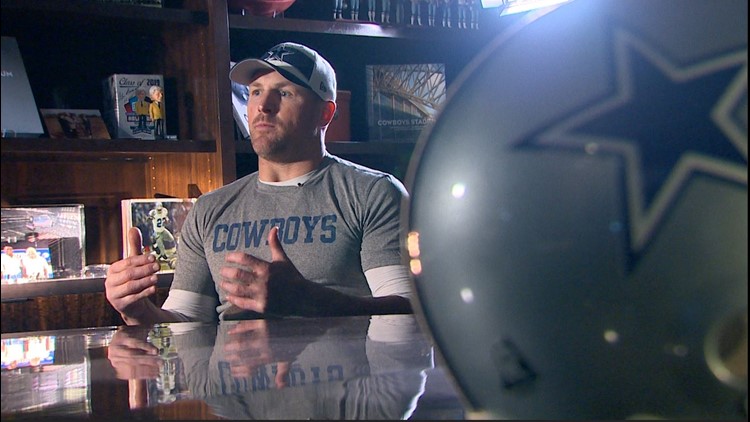 Witten not concerned by brain injuries: 'If something happens... I don't know that I would've changed it'

The Cowboys tight end is proud of the league's progress, and says he's not concerned about potential brain injuries after his career.
Author: Mike Leslie
Published: 6:28 PM CST November 4, 2019
Updated: 11:21 AM CST November 5, 2019

FRISCO, Texas — Dallas Cowboys tight end Jason Witten is halfway through his 16th NFL season. He has suffered the wear and tear of spending nearly half his life playing a violent game at the highest level.

But as Witten plays in his 247th NFL game on Monday night against the New York Giants, he maintains that he's unconcerned about the potential brain injuries that may result from his time in the league.

Dozens of former NFL players have suffered from dementia, Alzheimer's, and CTE (chronic traumatic encephalopathy) after careers full of high-speed impacts to their head.

"No, I don't think we do," Witten said, when asked if he or his family have long-term concerns about brain injuries. "I think we have to be realistic about what's happened. You know, you play 16 years, you're gonna have injuries, and there's gonna be affects of that."

Over the last decade, the NFL has initiated new rules and new practices aimed at making the game safer, and limiting brain injuries for their players.

"I'm proud to see just as a league and the Players Association, and really as a society, how many strides we've made, in research and development, you know with the concussion protocols. I'm proud of that."

Witten says one thing he's noticed is that more guys will sit out games due to a head injury.

"That didn't happen all the time," he said.

For Witten individually, he acknowledges the inherent risks of the sport and the importance of awareness, but doesn't worry about it.

"I think for me as a player, the game of football has provided so many wonderful things. So, look, if there's something that happens down the road, I don't know that I would have changed it, you know, and I really mean that from the bottom of my heart," said Witten.

He's grateful for the opportunities he's had and says his family doesn't have long-term concerns.

"We all take on risk every single day. And, I think, your ability to kind of understand that and then appreciate the opportunity that you had. Coming from where I came from, and now to see what I've been able to change, I'm proud of that."

Witten is a father of four. He has two sons who have been asking for years to play tackle football.

"This my first year for my boys to play tackle football," Witten said. "They've been asking me for about five years, but I think it's smart that they understand what they're doing. Coaches matter. I think, making coaches accountable and teaching them technique and fundamentals -- that's all important."

But while Witten wants his sons to be safe playing football, he also wants them to benefit from the camaraderie, core values and life lessons inherent to the game and being part of a team.

He understands the health risks of his sons stepping on the field, but also sees how far the game has come.

"But, again, I think, where we are as a society, what elementary coaches and middle school coaches are demanding of them, it's a lot different than what it was 25 years ago and, as it should be in a positive way."