Cowboys running back Ezekiel Elliott has been suspended six games over domestic violence allegations made against him last year, the NFL announced. 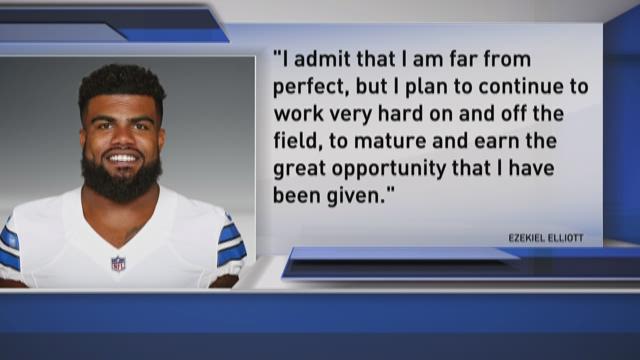 Dallas Cowboys running back Ezekiel Elliott has been suspended six games over domestic violence allegations made against him last year, the NFL announced.

Elliott’s ex-girlfriend accused the star running back of five instances of domestic violence over a six-day span in July of 2016. The Cowboys had drafted Elliott with the No. 4 overall pick three months earlier.

Elliott denies the allegations and is expected to appeal, ESPN reports. He has three days to file and then a hearing would be scheduled within the next 10 days.

The NFL said it made its decision based on more than a dozen witnesses' testimonies, photographs and other digital evidence, thousands of text messages, and electronic communications records.

Elliott responded via his representatives, who said they are "disappointed" in the decision. They said in a statement that the league's findings "are replete with factual inaccuracies and erroneous conclusions," and that evidence of that would surface in the coming weeks.

Elliott & reps statement: "In the coming weeks... a slew of additional credible and controverting evidence will come to light." #Cowboys

Elliott himself responded to the suspension late Friday evening, recognizing and apologizing for the distraction he's caused but maintaining his innocence.

If the suspension stands, he will make his 2017 debut with the Cowboys on Oct. 29 as they play the Washington Redskins.

Just before the 2016 NFL season, the Columbus, Ohio city attorney’s office announced it wouldn’t press charges in the case, citing “conflicting and inconsistent information across all incidents” after witness reports and evidence provided by Elliott’s legal counsel clouded the case.

In the weeks following the allegations, Elliott said he had text messages proving he was being set up. A complaint filed in Ohio also shows texts from Elliott's ex asking a friend to tell police she was pulled out of a car.

The NFL, however, has the power to discipline its employees under the personal conduct policy, even in the absence of charges. Elliott’s case has been under review for nearly 13 months.

Talk of a possible suspension swirled last month when ESPN’s Adam Schefter reported a “growing sense” that Elliott would face a brief suspension.

On Monday, Fox Sports’ Cris Carter said on FS1’s Undisputed that “information would come out” about Elliott’s case and that the 22-year-old running back would soon face a suspension.

"In the next 48 hours, I would be shocked if Zeke was not suspended." — @criscarter80 pic.twitter.com/aHyoxfjrw0

“Based on the information that’s going to come out, it’s going to be fairly easy to determine that something happened to this woman in her four days of being with Zeke,” Carter said.

Cowboys owner Jerry Jones has adamantly maintained Elliott’s innocence, saying in the team’s opening press conference at training camp that there is “nothing that has to do with domestic violence” in Elliott’s case.

Elliott has made headlines for multiple off-field incidents this offseason. Police say he was present during a bar fight at Clutch Bar in Uptown Dallas last month, but have since suspended their investigation over uncooperative witnesses.

Elliott also pulled down a woman's shirt to expose her breasts while on a rooftop at a St. Patrick's Day parade in Dallas, and missed some of OTAs in May after he was the passenger in a car accident. He was coming home from a charity event at the time of the wreck.

Elliott will not be paid for the suspended games if the ruling stands, the NFL said.