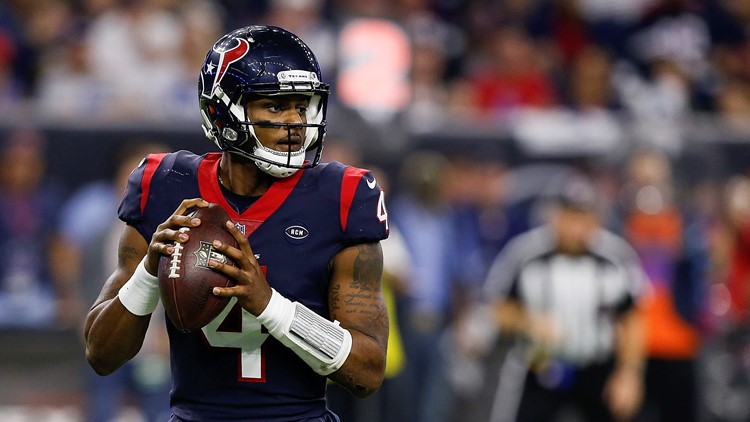 Photo by: Getty Images
HOUSTON, TX - JANUARY 05: Deshaun Watson #4 of the Houston Texans throws a pass during the fourth quarter Indianapolis Colts during the Wild Card Round at NRG Stadium on January 5, 2019 in Houston, Texas. (Photo by Bob Levey/Getty Images)

HOUSTON — The NFL season is over, and insiders and experts are already looking ahead to the 2019-20 season.

“Bell didn't just sit out a whole season to take a penny less than the four-year, $57.5 million contract Gurley signed with the Rams last summer. And in spite of that missed season, Bell will have a market for his services,” Graziano writes. “The Jets, 49ers and Texans are all in it, but Houston wins out by selling Bell on what he can do in an offense that features Deshaun Watson at quarterback and DeAndre Hopkins at wide receiver.”

PITTSBURGH, PA - JANUARY 14: Le'Veon Bell #26 of the Pittsburgh Steelers looks on against the Jacksonville Jaguars during the first half of the AFC Divisional Playoff game at Heinz Field on January 14, 2018 in Pittsburgh, Pennsylvania. (Photo by Kevin C. Cox/Getty Images)
Getty Images

The Texans will definitely need to address their offensive line, too.

“The Texans must -- and likely will -- address the offensive line in free agency and the draft. But Bell is what my colleague Bill Polian calls a "BYOB" back (bring your own blocking),” Graziano writes. “He can help elevate the Texans' offense to where it needs to be to compete for an AFC title.”

Graziano goes on to predict that the Texans will make it to Super Bowl LIV and lose to the New Orleans Saints.

“Yeah, it's crazy not to pick the Patriots to win the AFC at this point, but a way-too-early predictions column isn't the place to take the easy way out,” Graziano writes.

Per Super Book USA's Jeff Sherman, the Kansas City Chiefs are an early 6 to 1 favorite to win next year’s Super Bowl. They’re followed by the Los Angeles Rams, Saints and the New England Patriots in a second tier at 8 to 1 favorites.

The Texans fall in a fourth tier and are 20 to 1 favorites to go all the way.