'I’m sorry': Here's what Bill O'Brien said after he was fired by the Texans

Read the official transcript from the team after firing Bill O'Brien on Monday. 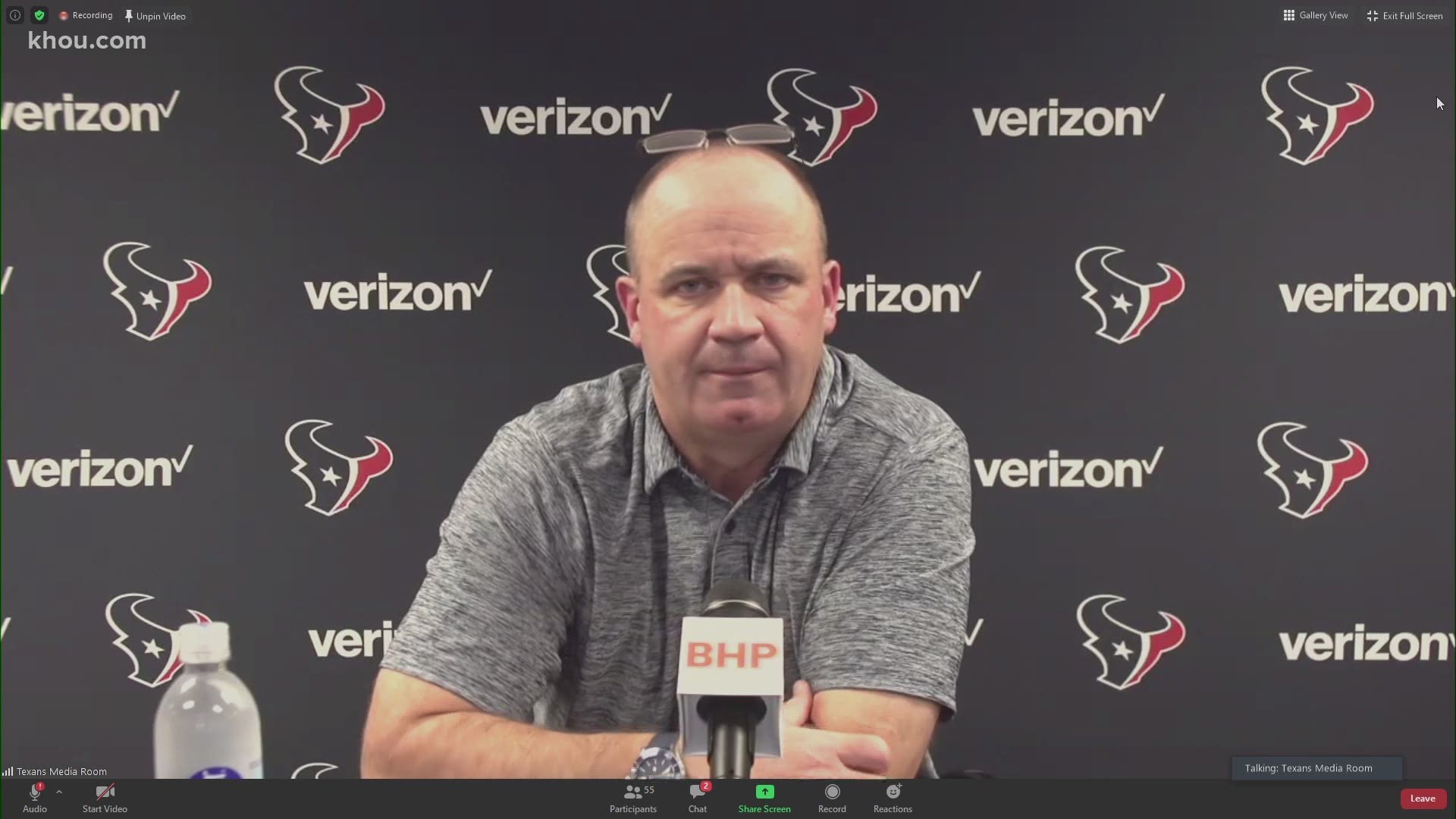 HOUSTON — The Houston Texans fired head coach and general manager Bill O'Brien on Monday, a day after the team lost 31-23 to the Vikings.

Houston is 0-4 this season and last in the AFC South.

O'Brien coached the Texans since 2014, accumulating a 52-48 record in the regular season and a 2-4 postseason record. Houston reached the postseason four out of the last six seasons but won only two postseason games.

Associate Head Coach Romeo Crennel will take over as interim head coach for the remainder of the season.

After the news, O'Brien held a news conference to discuss the team's decision. The full transcript of what he said is below.

Here's what he said:

“I appreciate everybody jumping on here. I just wanted to say a few things and then take a couple of questions. Number one, I just really want to thank the McNair family – Cal, Janice, Hannah, obviously the late Bob McNair, for just giving me and my family this opportunity. They were always very supportive. In the end, in this business it’s a bottom-line business and we weren’t able to get it to where we needed to get it. I obviously have tremendous respect for their family and again, I thank them for the opportunity that they gave me. I understand we fell short in terms of taking this team further in the playoffs, but I do leave knowing that myself and this staff gave everything this organization deserved and more. We worked very, very hard to try to get this to a place where it could be a championship program. We just didn’t get it done. I will leave here with very fond memories of the Houston Texans organization. Very fond memories of Houston. When my family and I came here in 2014, we had no idea what to expect. Houston is a great city. You think about Texas Children’s Hospital – what it’s done for my family, my son, Jack. We can’t thank Texas Children’s Hospital enough. Michael, my son Michael’s had a tremendous experience here living in West U and the friends that we’ve made here in Houston are lifelong friends. We really appreciate their friendship. Most importantly to the players – I talked to the players briefly this afternoon and just thanked them. I told them I love them. I think these players are just awesome guys. They practiced hard. They tried to do everything we asked them to do. It was a pleasure coaching them and I’m going to miss seeing them every day. Just really – the guys that have been with me for seven years to the guys that were only here for a year. Every one of them are just tremendous guys. I’m just sorry we couldn’t get it done this year early on here. But I wish them the best. This is a good football team. Romeo (Crennel) stepped in. He’s an awesome, awesome coach and he’ll do a great job. We’ve been through a lot here in the seven years that we’ve been together here. Most recently, obviously a pandemic. The worst hurricane in 100 years. The passing of Bob McNair and many more things that we had to deal with, and I think we always stood up. I believe that I tried to always stand up in front of the media. We didn’t always have the greatest of conversations with the Houston media but I feel like I stood up every day and tried to give them my take on what was going in the right direction for this organization, and then things that weren’t going in the right direction, things we needed to fix. But this has given me a great perspective and I will take this experience with me to my next opportunity. I want to coach. I love coaching. I love the players, the relationships with the players, the assistant coaches. I think football is the ultimate team game, so I really – there’s no doubt in my mind that I want to coach again. The coaches, the football operations staff and support staff are some of the hardest working people in the NFL. We demanded a lot of each other. Long hours, from the equipment room to the training room, to the weight room, to the cafeteria we made a lot of great changes to this organization and I really thank those people. They just work tirelessly. Again, I want to specifically reach out to Cal and tell him I appreciate the opportunity that he gave me. The support that he gave us. I’m sorry – and I told him this today, I’m sorry that we couldn’t get this team over the hump. We couldn’t get over the hump last year, the year before and obviously early on this year. It wasn’t from lack of effort. We did win four division championships here that we’re very proud of. We won four division championships in six years, so we did a lot of good things here, but we didn’t do enough. We didn’t bring a Super Bowl to Houston, which I believe eventually someone will. I think this is a championship team that needs to get things turned around right now, but I believe in this team. The room, the team meeting room that I stood up in front of every single day was full of guys that, like I said earlier, that have tremendous character and work ethic and I know that they will succeed on the field, but also in life. You think about some of these players and what they’ve done for the city of Houston. It was just an incredible opportunity for me to be around them every day and to coach them, and for them to really take the coaching and really try to do what we were asking them to do. Again, most people would say we didn’t do quite enough to get to the championship that we wanted here, but we did a lot of great things here. We won a lot of games. We won four AFC South division titles in six years and I think that’s a good accomplishment. It’s not good enough but we did a lot of good things here.”