Biles took a one-year break after winning four gold medals and a bronze medal in the 2016 Olympics, then came back to do even better, unleashing new skills. 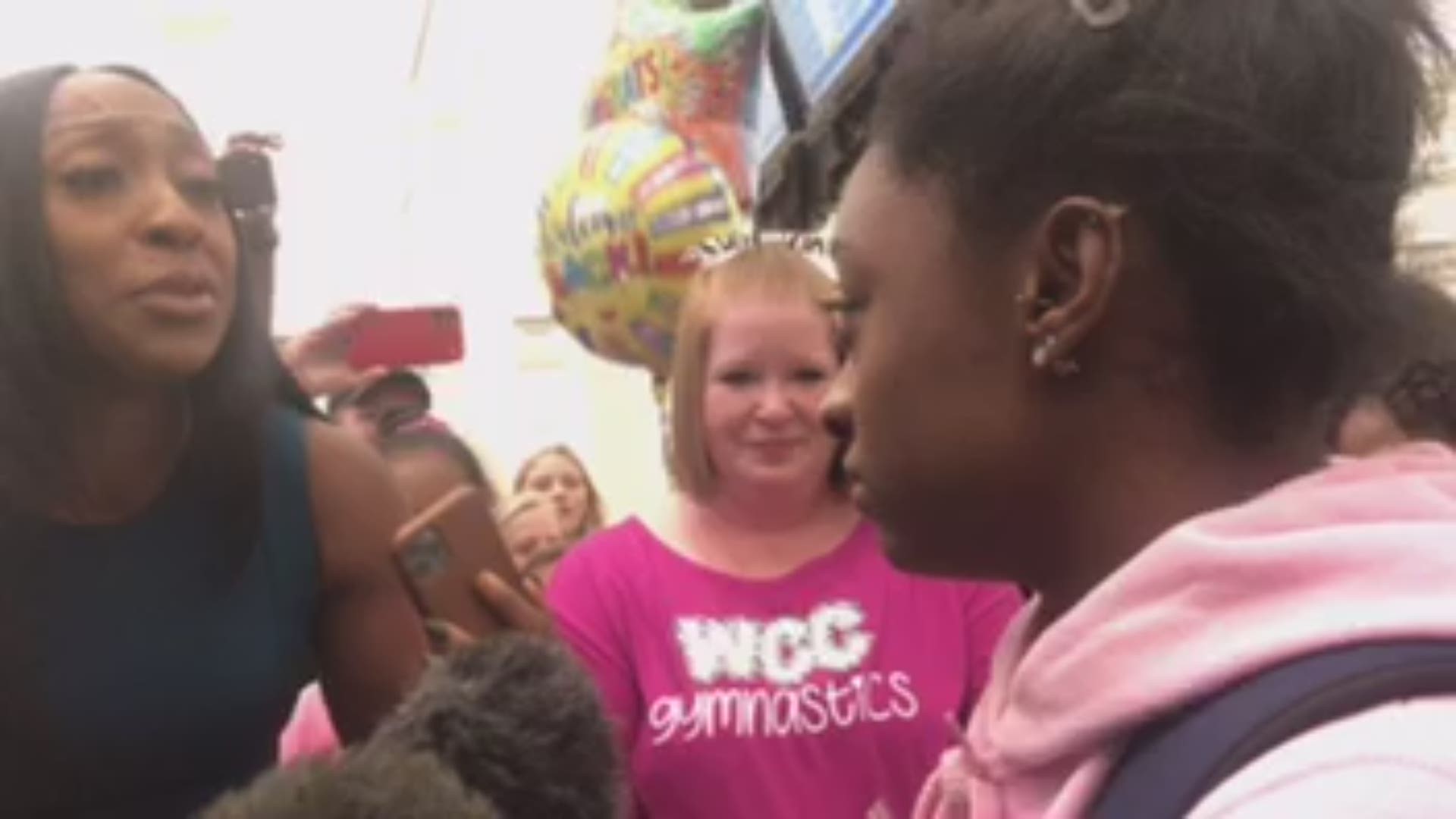 COLORADO SPRINGS, Colo. — Gymnastics powerhouse Simone Biles has been named the 2019 Team USA Female Olympic Athlete of the Year after another record-setting performance in competition this year.

Biles topped a list of award-winners of the honors presented by the U.S. Olympic and Paralympic Committee this week in Colorado Springs, Colorado.

Biles won five gold medals at the 2019 FIG World Championships, which is the most of any gymnast at a single worlds since 1958. She also set the all-time record of most medals in world championship competition with 25, which is two more than any gymnast in history.

RELATED: Biles sets record for most medals at gymnastics worlds

During the competition in Germany, she completed two skills never performed by a female gymnast in competition: a double-double dismount on beam and a triple-double on floor, which will be named in her honor.

Biles, of course, reached international superstar status in 2016 when she won four gold medals and a bronze at the 2016 Olympics in Rio de Janeiro.

Figure skater Nathen Chen was named the Male Olympic Athlete of the Year. Here's a full list of the winners and a little about each one provided by Team USA:

Female Olympic Athlete of the Year
Simone Biles (Spring, Texas), Gymnastics
Biles won five gold medals at the 2019 FIG World Championships – more than any gymnast at a single worlds since 1958 – improving her career total to 25 world medals, two more than any gymnast in history. During the competition in Stuttgart, Germany, she completed two skills never performed by a female gymnast in competition: a double-double dismount on beam and a triple-double on floor, which will be named in her honor. She also became the first woman since 1952 to win a sixth U.S. all-around title.

Female Paralympic Athlete of the Year
Oksana Masters (Louisville, Kentucky), Para Nordic Skiing and Para-cycling
Masters had a banner year that saw her capture five world titles and six total medals at the Para Nordic skiing world championships before claiming the overall world cup cross-country globe in the women's sitting class. A multisport athlete, she ended the year with a pair of silver medals at the UCI Para-cycling Road World Championships in the H5 road race and time trial.

Male Olympic Athlete of the Year
Nathan Chen (Salt Lake City, Utah), Figure Skating
Chen became the first American man since 1984 to win back-to-back world championship titles in March 2019, and only the fourth male figure skater – and first from the U.S. – to win consecutive ISU Grand Prix of Figure Skating Final titles (2017, 2018) after securing wins at the 2018 Internationaux de France and 2018 Skate America, where he topped the field by 41.06 points – the largest margin in Skate America history. He also won his third consecutive U.S. title, smashing the record for the highest margin of victory at 58.21 points.

Male Paralympic Athlete of the Year
Ben Thompson (Ladson, South Carolina), Para Archery
Thompson upset the world No.1 archer to win gold in the individual men’s compound event at the 2019 world championships in ‘s-Hertogenbosch, Netherlands. He also led Team USA to a world record in the compound men’s open team ranking round and ended the season with a No. 1 world ranking.

Olympic Team of the Year, presented by Dow
U.S. Women’s World Cup Team, Soccer
The U.S. Women’s National Soccer Team went undefeated at the 2019 FIFA Women’s World Cup, earning a historic 13-0 victory against Thailand and winning its second straight – and fourth overall – World Cup title, the most of any nation. Team co-captain Megan Rapinoe became only the second American to win the Golden Boot award after scoring a tournament-high six goals – including the game-winning goal in the final – and also earned the Golden Ball as the tournament’s most valuable player.

Olympic Coach of the Year
KiSik Lee (Chula Vista, California), Archery
Lee led U.S. archers to a historic year, highlighted by Brady Ellison becoming the first U.S. Olympic-style archer to win the world title since 1985. Under Lee’s tutelage, the world No. 1-ranked Ellison became the first man to win five world cup final titles, also placing at three world cup stages with two golds and one bronze medal. Additionally, Ellison set a world record of 702/720 in the qualifying stage at the Pan American Games Lima 2019. With Lee in the coach’s box in Lima, Ellison and 15-year-old Casey Kaufhold also won gold in the mixed team event, which will make its Olympic debut in 2020.

Paralympic Coach of the Year
Wesley Johnson (Sandy, Utah), Paratriathlon
Johnson served as an assistant coach for the U.S. team at the 2019 ITU Paratriathlon World Championships in Lausanne, Switzerland. In that role, he guided Kendall Gretsch (PTWC), Allysa Seely (PTS2) and Kelly Elmlinger (PTS4) to silver medals, and five additional U.S. paratriathletes to top-five finishes. Johnson also coached the U.S. team at the ITU World Paratriathlon Series stop in Yokohama, Japan, where American athletes earned three gold medals, two silvers and one bronze. Additionally, he is the personal coach of Grace Norman (PTS5) and Chris Hammer (PTS5), who each ended their seasons ranked No. 3 in the world, and Brad Snyder (PTVI), who finished his year ranked No. 8 in the world in just his second year as an elite paratriathlete. Johnson leads a squad of elite, junior elite and paratriathlon elite athletes as the founder and head coach of Balanced Art Multisport in Salt Lake City.