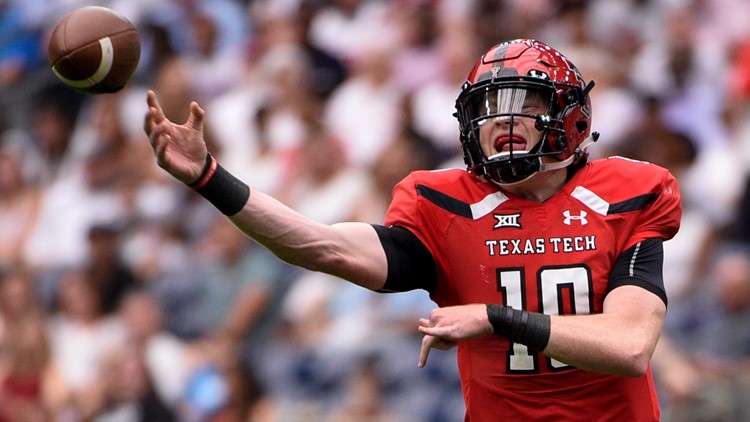 Photo by: AP
Texas Tech quarterback Alan Bowman (10) throws a pass during the first half of a college football game against Mississippi, Saturday, Sept. 1, 2018, in Houston. (AP Photo/Eric Christian Smith)

FORT WORTH, Texas — The Davey O’Brien Foundation has revealed the 2019 Davey O’Brien National Quarterback Award Watch List on Tuesday, a group that includes 30 of the nation’s top returning college quarterbacks. Six players on the list hail from a school in the state of Texas.

Texas Tech sophomore Alan Bowman was one of only six sophomores recognized on the watch list. Bowman was among the top freshmen in the country a year ago as he threw for 2,638 yards and 17 touchdowns despite playing in only eight games due to a pair of injuries.

Texas quarterback Sam Ehlinger was named on the watch list on the same week he was named the Big 12 preseason offensive player of the year. Ehlinger finished his sophomore year having completed 275 of 425 passing attempts for 3,292 yards and 25 touchdowns with only five interceptions. The Texas signal-caller had a 10 game streak where he did not throw an interception last season.

Ehlinger capped off a wonderful 2018 with a win at the Sugar Bowl over Georgia.

Baylor quarterback Charlie Brewer knows the company on this list from Texas very well and Baylor coach Matt Rhule thinks his guy stands out from the rest.

“I thought at the end of last year Charlie really settled into playing quarterback and not feeling like he had to do everything himself,” Rhule said. “I put Charlie in hard positions last year, making him rotate early in the year and that wasn't easy on him. But I thought it really helped him develop where he wasn't worried anymore about anything else other than when I get in here is how I'm going to play.”

Brewer started all 13 games last season with 3,019 yards in the air with 19 touchdowns and nine interceptions. He also rushed for 375 yards and seven scores.

North Texas quarterback Mason Fine slips away from Arkansas defenders McTelvin Agim and Briston Guidry as he runs for a gain in the first half of an NCAA college football game Saturday, Sept. 15, 2018, in Fayetteville, Ark. (AP Photo/Michael Woods)
AP

North Texas quarterback Mason Fine was named Conference USA preseason offensive player of the year this week which is nothing new for the arm of the Mean Green. Fine has been named the C-USA offensive player of the year in each of the past two years. He enters his senior season as the nation’s leading passer among active players with 9,417 yards. North Texas is hoping Fine can repeat or even surpass the 3,793 yards and 27 touchdowns he threw with just five interceptions last season.

Houston quarterback D'Eriq King is a senior to watch in 2019. King returns for his senior season after setting The American Athletic Conference single-season record with 50 touchdowns responsible for (36 pass, 14 rush), despite missing the last 2.5 games with an injury.

King scored a rushing touchdown in all 11 games played last season. The Manvel, Texas, native led the nation with 27.5 points responsible for per game, four points ahead of the No 2 spot shared by Heisman finalists Kyler Murray and Dwayne Haskins, who both were drafted in the top ten in the NFL draft this past April.

Texas A&M quarterback Kellen Mond is another dual-threat player that should not go unnoticed in 2019. Mond started all 13 games in 2018 with 24 passing touchdowns and nine picks. The Aggies offensive leader also rushed for nearly 500 yards another and seven touchdowns last season.