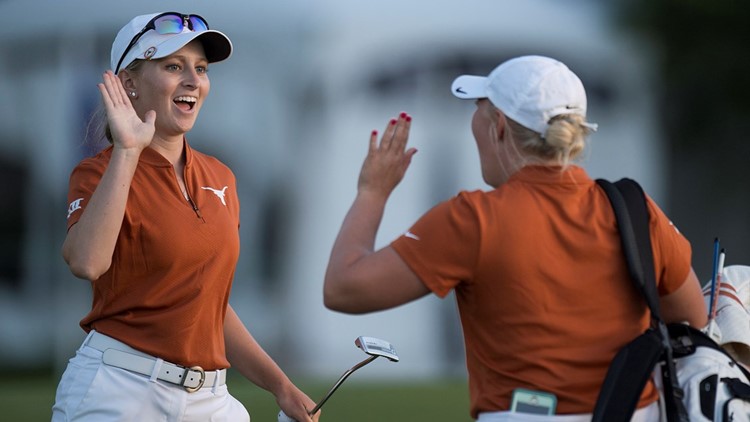 Photo by: texassports.com
First team All American Kaitlyn Papp helped the Longhorns to the best season in program history.

AUSTIN, Texas — The Texas Longhorn women's golf team had the best season in school history and many more are to follow with young talent leading the way. On Tuesday, Freshman Hailee Cooper, sophomore Agathe Laisne and sophomore Kaitlyn Papp all earned Women's Golf Coaches Association First-Team All-America honors. Texas was the only school in the nation to have three golfers named First-Team All-Americans in 2018-19. This was the first time in program history that three athletes were named on the prestigious list.

Papp, who was the 2018 Big 12 Golfer of the Year, played in 33 rounds with seven top-10 individual finishes, including tying for 10th at the NCAA Championship.  Papp was Big 12 Championship runner-up.

Laisne was the 2019 Big 12 Conference Champion and tied for 10th at the NCAA Championship. She had eight top-20 finishes on the season, 15 rounds at par or better and seven rounds in the 60's. The sophomore was second on the team with a stroke average of 72.30, which ranks fourth on Texas' all-time single-season stroke average list.

The Longhorns advanced to the NCAA Match-Play Quarterfinals to finish tied for fifth at the NCAA Championship – the program's best finish since 2003. Texas was the stroke-play medalist at the 2019 NCAA Championship.Texas won its third consecutive Big 12 Conference Championship in 2019 and won its first NCAA Regional in school history.