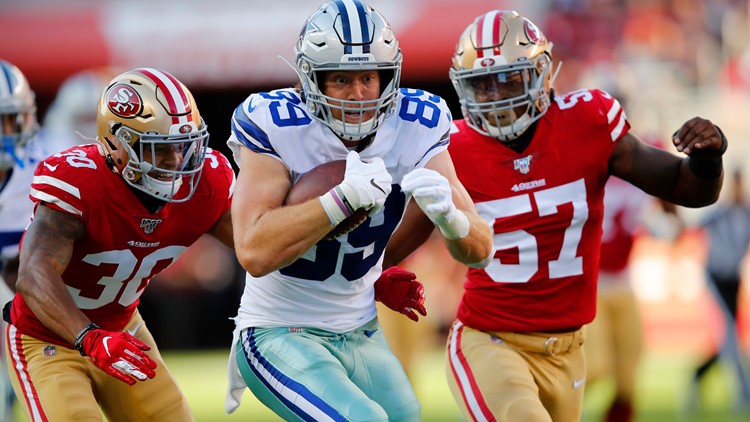 DALLAS — The wait ended on Saturday night as the Dallas Cowboys took the field to play a preseason game against the San Francisco 49ers. Saturday's contest marked the first of four preseason games for Dallas in 2019, in which the starters usually play a series or two before giving way to the younger players who don’t have their spots locked in on a 53-man roster.

Despite ultimately falling 17-9, here are three players (along with an honorable mention) that stood out against the 49ers at Levi Stadium.

The honorable mention from Saturday night's action was young defensive player Luke Gifford. The former Cornhusker linebacker and special team's ace has been receiving quite a lot of praise from those inside the locker room including the defensive captain Sean Lee.

The rub here is Gifford was taken off the field with a lower leg injury that was later ruled a particularly nasty high ankle sprain but not before he was able to record his first interception.

Hopefully the injury isn’t too serious – the x-rays for structural damage came back negative – as he has a great shot to land on the team as a special teamer and add to the linebacker depth.

Jarwin seemed to pick up right where he left off last season as he became a go-to target for Dak Prescott and the offense as they were light at the position with Jason Witten not yet making his 2019 debut. Jarwin was able to work his way into a large portion of the snaps and he made some plays.

RELATED: Is tight end still a draft need for the Cowboys?

This season, while the Cowboys have brought back veteran Witten, Jarwin and fellow understudy Dalton Schultz could still see a good amount of action as they spell the 37-year-old future Hall of Famer.

Jarwin isn’t the best blocker at tight end, which is partially why the position appeared unsettled before Witten announced his return, but he can be quite the weapon up the seams as he demonstrated last December with a three-TD afternoon against the New York Giants. On Saturday, as a featured element in the offense, Jarwin finished the night with four receptions for 51 yards.

The Cowboys drafted wideout Wilson in the sixth round of the 2018 NFL Draft but, unfortunately, he was forced to sit out the entire season on the injured reserve list after tearing his labrum in training camp. This year, however, Wilson has quite the opportunity with the departures of Cole Beasley, Allen Hurns and Terrance Williams from the wide receivers room.

As the team continues their youth movement, Wilson showed some flashes of the player he could be and that of the player the Cowboys used a draft pick on a year ago. The former Boise State Bronco ran good crisp routes and showed good hands. His biggest question will be whether or not he can stay healthy but his appearance in game action is definitely a step in the right direction.

On Saturday, Wilson was tied for 2nd on the team after Jarwin with three receptions on three targets for 36 yards. All three of Wilson's receptions moved the chains with catches of 15, 11, and 10 yards respectively.

The Cowboys have spent the last several years rebuilding their defensive backfield exclusively through the NFL Draft and undrafted free agency. Last season the team saw contributions from both Jourdan Lewis and Awuzie as part of that initiative.

Dallas hopes to see the young DBs continue to improve and "Chido" performed in two very well played snaps in the few that he saw on Saturday night.

As a starter opposite Pro Bowl Byron Jones, 2017 second round pick Awuzie is already counted on to locked down the corner position. The next step in the progression would be creating turnovers but based on the frequency that he gets his hands on the ball, it shouldn’t be hard for the former Colorado Buffalo to make the transition.

The Cowboys will play again on Saturday, August 17 in Los Angeles in a divisional round rematch against the Rams.

Which players stood out the most to you in the first preseason action of the 2019 season? Share your thoughts on the Cowboys with Patrick on Twitter @DraftCowboys.