Wilson succeeded Larry Coker in 2016 and guided the Roadrunners to their first bowl appearance in his first season, but UTSA has gone 3-9 and 4-8 the last two years. 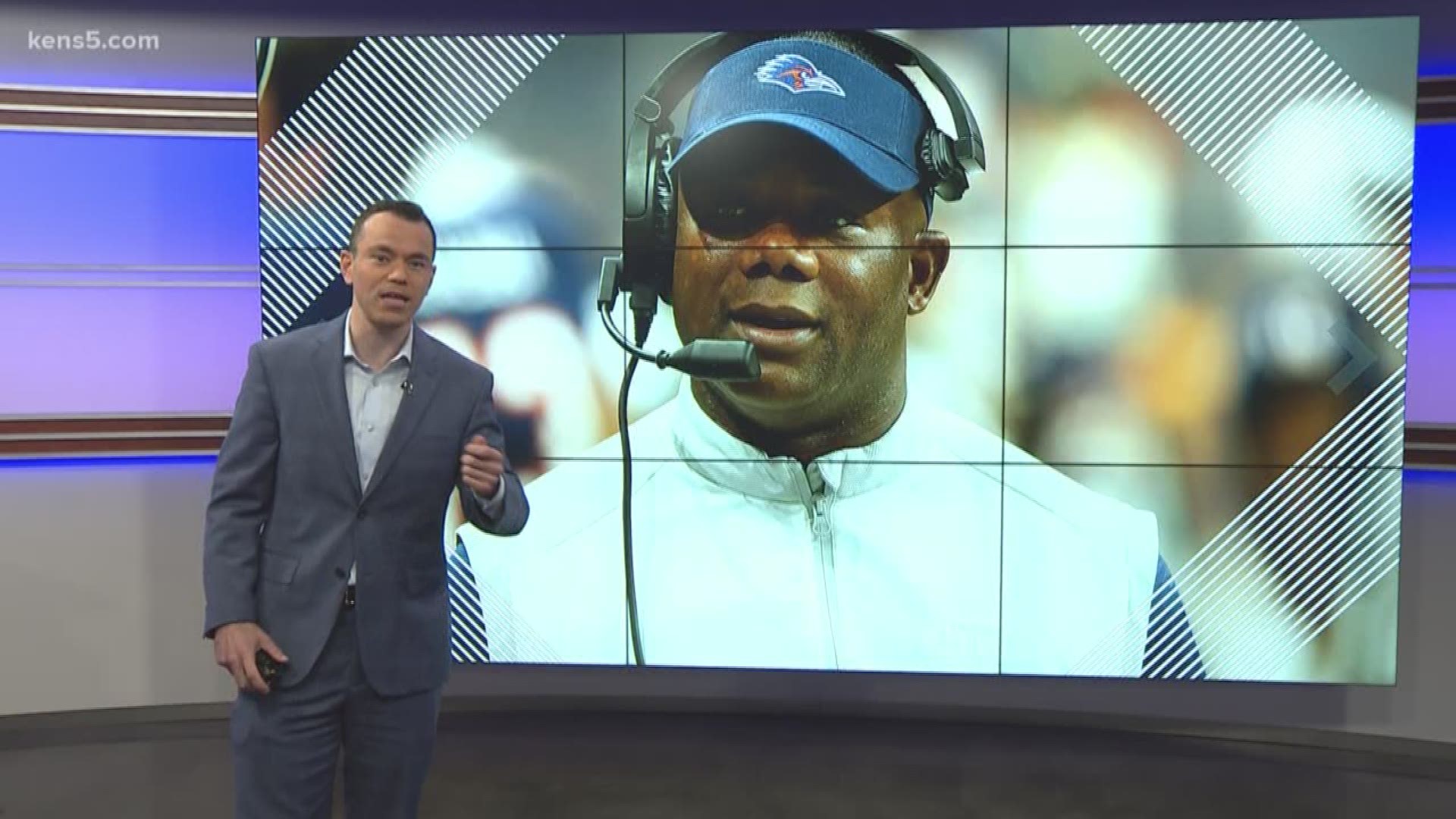 SAN ANTONIO — Frank Wilson, who left LSU in 2016 to succeed Larry Coker as head football coach at UTSA, has been fired.

Wilson led the Roadrunners to their first bowl appearance in his first season and went 19-29 overall, including 13-19 in Conference USA, during his four-year tenure at UTSA.

Wilson, 46, received a raise and a contract extension through the 2021 season in the summer of 2017.

Lisa Campos, UTSA vice president for intercollegiate athletics, made the announcement of Wilson's firing in a news release Sunday morning.

Juan Castillo, an NFL assistant coach for 24 years before joining Jim Harbaugh's staff at Michigan as an analyst this season, confirmed to KENS5.com on Sunday that he's interested in the UTSA job.

"I think UTSA is a gold mine," Castillo, 60, said. "I love San Antonio, too. It's a great city. You've got to be able to recruit and have good people on your staff. I've always been big on fundamentals and playing hard. I know offense and defense and I've recruited, too.

Some of the other names being mentioned as Wilson's successor include former North Carolina and Southern Miss head coach Larry Fedora, now an offensive analyst under Tom Herman at Texas; Joey McGuire, associate head coach and tight ends coach at Baylor; and Glenn Spencer, defensive coordinator at Florida Atlantic. Spencer was among the finalists for the UTSA job when Wilson was hired.

Credit: Rich Schultz / Getty Images
Juan Castillo, left, has coached in the NFL for 24 seasons and has been an analyst on Jim Harbaugh's staff at Michigan this season.

“While decisions like this are never easy," Campos said in the UTSA news release, “it is important that we take the steps that will help us build for the future and keep UTSA Athletics a vital part of the community.

"There is so much to look forward to as we continue to position our program to compete at the highest level. We will use a search firm and immediately begin a national search for UTSA’s next head football coach.”

Castillo's last stint in the NFL was with the Buffalo Bills (2017, 2018). He began his pro coaching career with the Philadelphia Eagles in 1995 and also was on the Baltimore Ravens staff for four seasons. He was an assistant coach at Texas A&I, now Texas A&M-Kingsville, for nine years before being hired by the Eagles.

"You've got to be good with kids and I think that's my strength," Castillo said. "I know how to get them to play. I've coached in the NFL for 24 years, but I know what it takes to be successful in college. I know how to go out there and recruit. I once signed four offensive linemen who all went to the NFL."

A Port Isabel native and Texas A&I graduate, Castillo played linebacker with the USFL San Antonio Gunslingers in 1984 and 1985.

"To me, coaching is not about the money," Castillo said. "I just have a passion for football and working with kids, seeing them grow and develop as players and people. You've got to recruit good players, but you've also got to develop them. That's what it's all about."

Wilson was an assistant coach at LSU for six seasons before landing his first college head-coaching job at UTSA, which started playing football in 2011.

The Roadrunners lost to Louisiana Tech 41-27 in their finale on Saturday in Ruston, La., finishing 4-8 for the season and 3-5 in C-USA.

UTSA hasn't won back-to-back games since the first half of the 2018 season. The Roadrunners won three straight to climb to 3-3 last year, but finished 3-9 after losing their last six games.

Wilson's first team finished 6-7 after losing to New Mexico in the New Mexico Bowl. The Roadrunners went 6-5 in 2017, but did not receive a bowl bid.

Wilson led UTSA to its first – and only – victory over a Power 5 conference opponent in 2017 when the Roadrunners beat Baylor 17-10 in Waco.

Defensive end Marcus Davenport, a Stevens graduate, became UTSA's first No. 1 draft pick in 2018, but the Roadrunners have gone 7-17 since his final collegiate season in 2017.

Wilson's son, Frank Wilson IV, a cornerback at Brandeis High School, withdrew his commitment to UTSA in a tweet Sunday.