The Roadrunners improved to 6-4 on the season with Saturday's road victory. 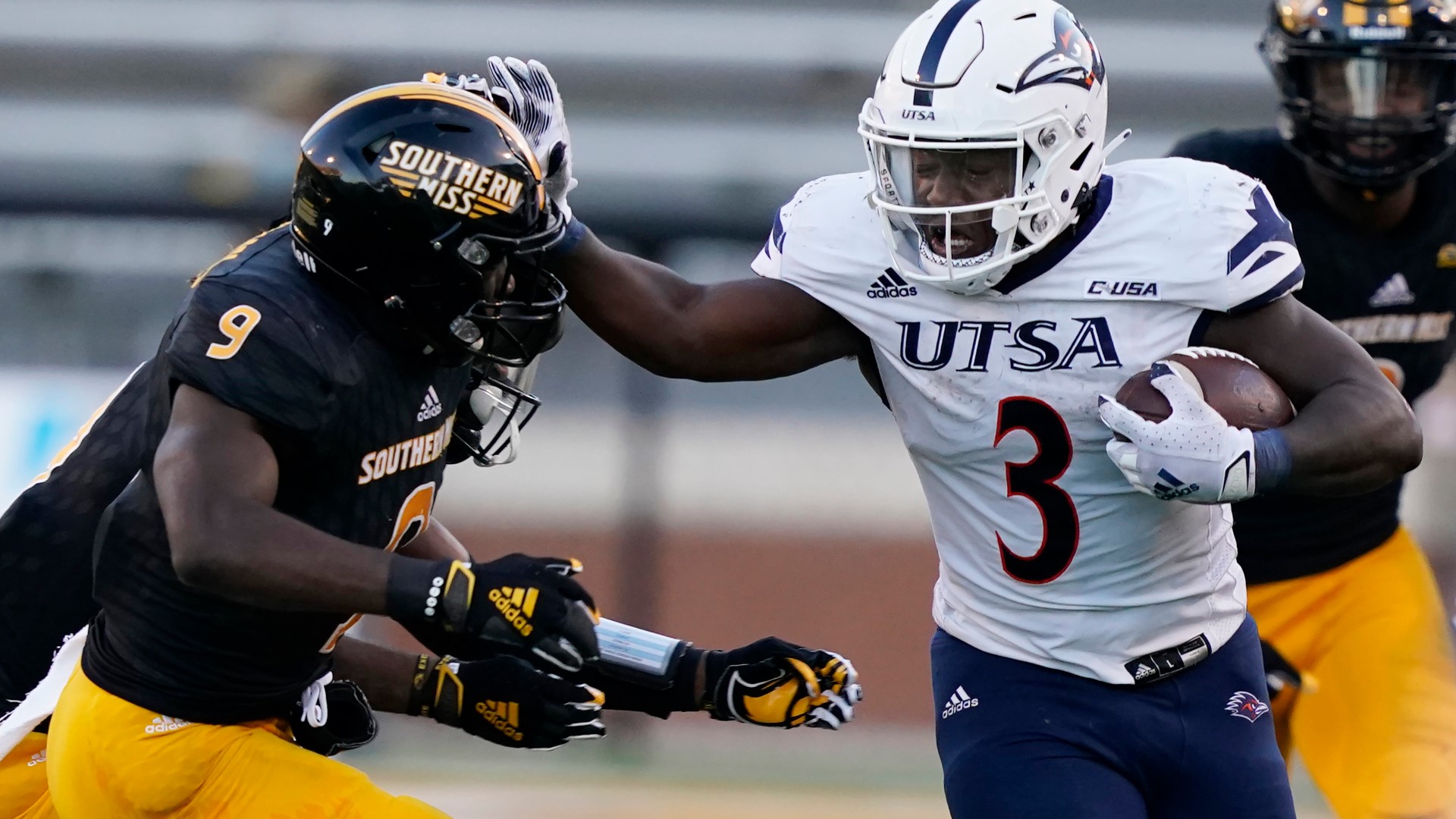 HATTIESBURG, Miss — Sincere McCormick broke the UTSA single-season rushing yardage record after piling up 173 yards on the ground to help lead UTSA to a 23-20 win over Southern Miss in Conference USA action on Saturday afternoon at Roberts Stadium.

McCormick’s fifth 100-yard rushing output of the season highlighted the sixth win of head coach Jeff Traylor’s first season at the helm of the Roadrunners, who improved to 6-4 overall and 4-2 in the conference while reaching six victories for the fifth time in the program’s 10-year history and the first since 2017.

*Roadrunners earn their 6th win. It's not a guarantee for a bowl game, but still. Big accomplishment. A win against North Texas next week should get them a bid, IMO.

Tears of joy ran down my face knowing how much hard work we’ve put in. I’m so grateful to play along side some soldiers. Thank you God!!#GoingBowling #Wontheday

McCormick carried the ball 32 times and reached the end zone twice in eclipsing Jarveon Williams’ previous school standard of 1,042 yards set in 2015. The sophomore from Converse Judson High School also tied Williams with his eighth career 100-yard performance and now has matched Jalen Rhodes’ single-season rushing touchdowns mark of nine established in 2016. He also surpassed 2,000 yards on the ground with his 173-yard effort, as he now has 2,077 in just 21 games as a Roadrunner.

Trailing 10-9 at the half, UTSA put together back-to-back touchdown drives to take a 23-10 lead in the third quarter.

McCormick broke loose for a 69-yard touchdown dash on the opening drive of the second half that helped UTSA reclaim the lead. That run was a milestone setter, as it put the him over the 1,000-yard mark for the season and above the 2,000-yard for his career.

McCormick found pay dirt again later in the third quarter on a possession that was set up by Rashad Wisdom’s third interception of the season. Brenden Brady had runs of 11, 6 and 9 yards to help set up McCormick’s 1-yard TD plunge, which tied him atop UTSA’s single-season rushing touchdowns chart.

Southern Miss would not go away quietly, cutting the deficit to three points after a 27-yard field goal from Briggs Bourgeois late in the third and a 51-yard touchdown reception by Frank Gore Jr. with 10:19 left to play in the game.

UTSA defense came up with a stop on what turned out to be the final possession of the game for the Golden Eagles (2-7, 1-4 C-USA). On third down and seven from the UTSA 42, Southern Miss quarterback Tate Whatley was pressured and saw his pass deflected by Trumane Bell II, which Whatley caught for a 19-yard loss, forcing a punt.

From there, the Roadrunners ran out the clock with a pair of first downs to secure their first win against Southern Miss since 2016.

Jamal Ligon led UTSA with nine tackles, one sack and a forced fumble, while Trevor Harmanson added eight stops and a PBU and Wisdom pitched in with seven tackles.

The Golden Eagles struck first on a 37-yard field goal by Bourgeois midway through the opening frame.

Southern Miss threatened to take a 6-0 lead later in the first, but Harmanson sniffed out a fake field goal and stuffed Bourgeois for no gain at the 5-yard line.

The UTSA defense then came up with another big play early in the second quarter, as Ligon’s strip-sack near the goal line resulted in a team safety when the ball rolled into the end zone and then out of bounds. It marked the fourth safety in program history and the first since 2018 against Texas State.

The Roadrunners took their first lead of the day with 5:48 left until halftime. Frank Harris hit Zakhari Franklin on a fade route into the end zone for a 6-yard TD connection. The catch put Franklin over 1,000 receiving yards for his career and the score moved him into sole possession of second place on the school’s single-season touchdown receptions list with six, two behind Kerry Thomas Jr.’s school record set in 2016.

Southern Miss went back in front after a 13-yard TD pass from Whatley to Tim Jones and the ensuing PAT with 2:18 remaining in the second.

The Roadrunners will return home to North Texas (3-3, 2-2) next Saturday, Nov. 28. Kickoff is set for 2 p.m. at the Alamodome and the game will be televised by Stadium (Fox Sports Southwest in Texas).

This @UTSAFTBL team is jacked up after earning its sixth win of the season.

Heck of an accomplishment for @CoachTraylor in his first year. Who knows what will happen with bowl season, but it's easy to buy stock in this program.@yoboisin | @KENS5 pic.twitter.com/JNdT0lC8Ux