Around 75 Arlington families of multiple apartment complexes were displaced but safe after a storm that produced a tornado in the area Tuesday night. This story was updated at 7 p.m. Wednesday with additional information on the tornado from the National Weather Service.

After surveying roofs that were torn off apartment buildings in Arlington, officials say there's evidence that an EF2 tornado with wind speeds of around 115 mph moved through the area Tuesday night.

A strong line of storms passed through much of the Dallas-Fort Worth area Tuesday night, producing a tornado a little before 9 p.m. through the city of Arlington, the National Weather Service confirms.

So far, only three people have been taken to local facilities for storm-related injuries, all of which authorities describe as minor.

The National Weather Service said that preliminary information shows that the tornado had a path length of 5.01 miles and a max width of 150 yards. It was on the ground for approximately seven minutes. 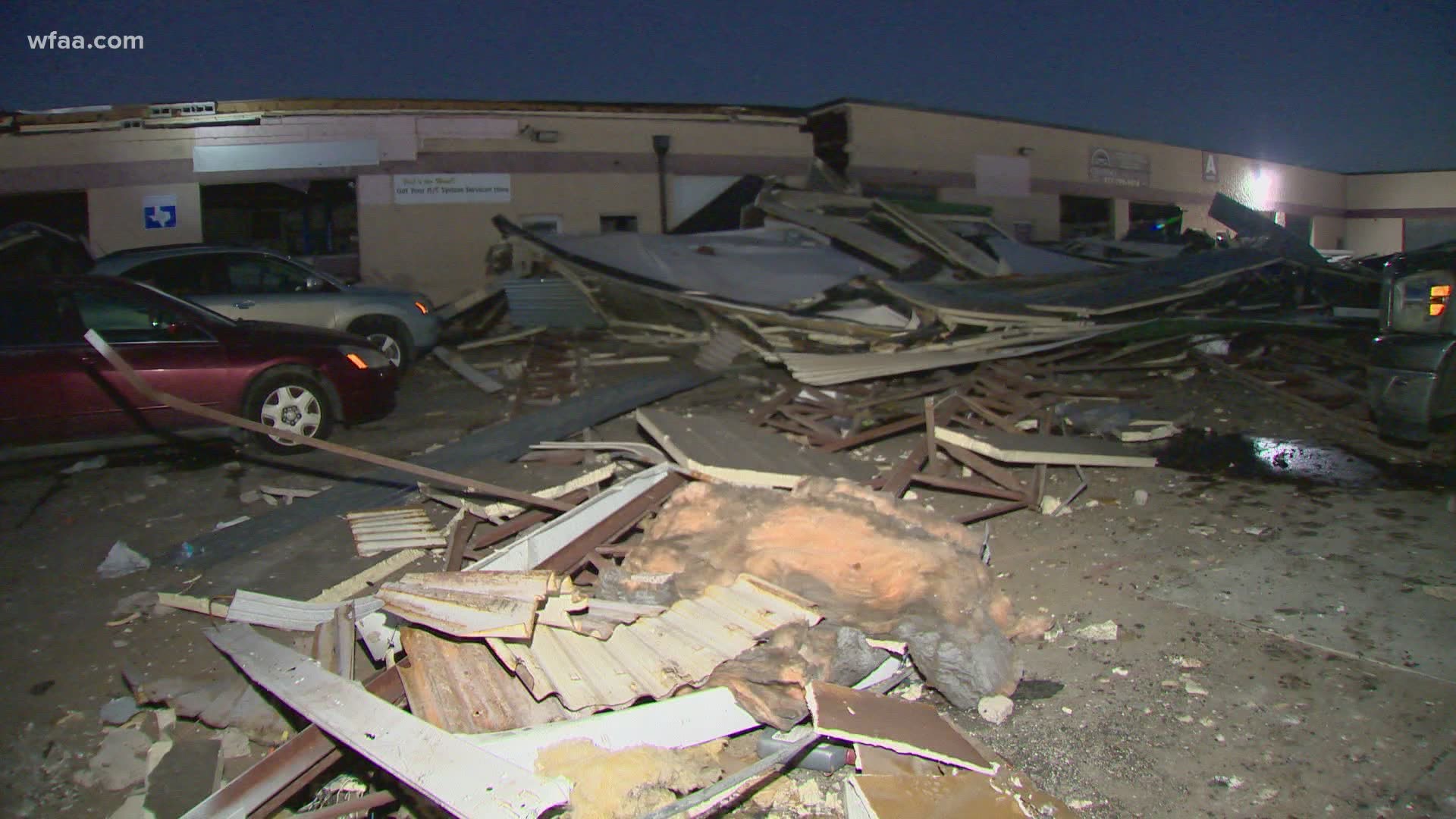 The NWS surveyed a mile to 2 miles of the area earlier in the morning, including the area near Cooper Street and two apartment complexes where roofs were ripped off, she said.

The damage was reported throughout the east side of the city, officials said, with the worst of it around Colorado Lane and South Cooper Street.

The roof damage at the Waterdance Apartments and the Mirage Apartments was consistent with that of an EF2 tornado, said Jennifer Dunn, a meteorologist with the National Weather Service.

Around 75 families were displaced from the three apartment complexes as a result of the damage. They were evacuated from the buildings by first responders and temporarily relocated.

The affected apartments are:

Arlington ISD is also assessing damage which mostly occurred at the district's Service Center at 1201 Colorado Lane, the district said in a statement. High winds tore off part of the roof of the laundry facility and toppled a nearby radio tower. "Our bigger concern is for our students who live in nearby apartments and neighborhoods," said Superintendent Dr. Marcelo Cavazos.

Cavazos is urging parents of Arlington ISD students who need help because of the storms to reach out to their campus principal or the Arlington ISD Student Outreach Services team at studentoutreach@aisd.net for assistance

Arlington police said late Tuesday night that its Emergency Operations Center has been activated and the department knew of at least seven reported building collapses from the night's storms, including three apartment complexes, two commercial buildings, a church, and a residential home.

ARLINGTON TORNADO: This is the Burger Box at the corner of S Cooper St & Secretary Drive.

Two cars are sitting under debris in what appears to be the drive thru.

There are several businesses behind this restaurant but none of them appear to have any significant damage. @wfaa pic.twitter.com/efDGBLkPsy

A significant amount of debris was also scattered through the city's roadways, and numerous traffic lights were out, officials said.

One of the commercial buildings appeared to be the Burger Box restaurant, which is on South Cooper Street.

Anthony Harris and his two cousins were in the drive-thru of the Burger Box in Arlington when the storm rolled in.

The trio was heading to work, but stopped to get a bite to eat. That’s when the roof of the drive-thru collapsed onto Harris’ car.

Thankfully, Harris and his cousins were able to climb out of his black pickup truck safely.

“It was something I’ve never been through. It was pretty horrific, scary,” Harris said. “If you hear the sirens, get out the way.”

Several witnesses described "swirling winds" and then large booms and water pouring into the apartments. The Red Cross said the Waterdance and Mirage Apartments both lost their roofs.

Kobe Bennett was inside his apartment when the roof was torn off.

Says he hid under the bed and that everything happened very fast. pic.twitter.com/6PWVFO2l3K

The storm affected more than 70 units at those apartments and displaced anywhere from 60-100 people. Two local hotels will provide those families shelter, according to the Red Cross.

Pioneer Parkway was closed in both directions between Center Street and Collins Street because of debris on the roadway from area apartment complexes, police said.

Continuing to assist @ArlingtonTxFire at a few locations tonight due to roof collapses and debris field. Pioneer Parkway is closed in both directions between Center Street and Collins Street due to debris from area apartment complexes on roadway. pic.twitter.com/S73pT0o4ge

Police also said Atmos and Oncor are helping with downed power lines and gas leaks resulting from the storm damage and responding to disaster mitigation where necessary.

The Red Cross said it is still assessing the situation in Arlington and that due to COVID-19, it will not go to the scene, but instead will use a client assessment system via phone.

Red Cross officials said they helped a combined 80-plus families from the three apartment complexes with emergency lodging and food and began working with apartment management and city officials overnight to help those affected.

For those that were significantly impacted, the Red Cross has caseworkers helping them secure lodging, food and physical and mental health services, officials said.

Severe thunderstorm warnings were issued Tuesday evening for parts of North Texas until 9 p.m. as a cold front storm rolled through the area.

The area under the warning included parts of Denton, Tarrant, Collin and Grayson counties.

Around 9 p.m., a tornado warning was issued for Dallas and Tarrant counties. That warning expired at 9:17 p.m.

Just before 8 p.m., a tornado warning was issued for part of Denton County. The radar showed circulation moving northeast near Sanger, Texas around 8 p.m.

View radars in your area here

The cold front should make its way through the region by midnight.

Read on for more information on power outages and to see how you can submit your photos to WFAA.

Download our free WFAA app to stay up-to-date on all news stories in the Dallas-Fort Worth area, including weather. WFAA has a new way for you to submit photos and videos- not just of storms, but of anything. Use the "Near Me" feature in your WFAA app to submit your photos and videos. As always, your safety comes first when taking weather photos. Stay safe and take shelter if you need to. Remember to turn around, don't drown.

Here's a brief rundown of what people have shared with us:

Viewer photos: Tornado confirmed to have passed through Arlington