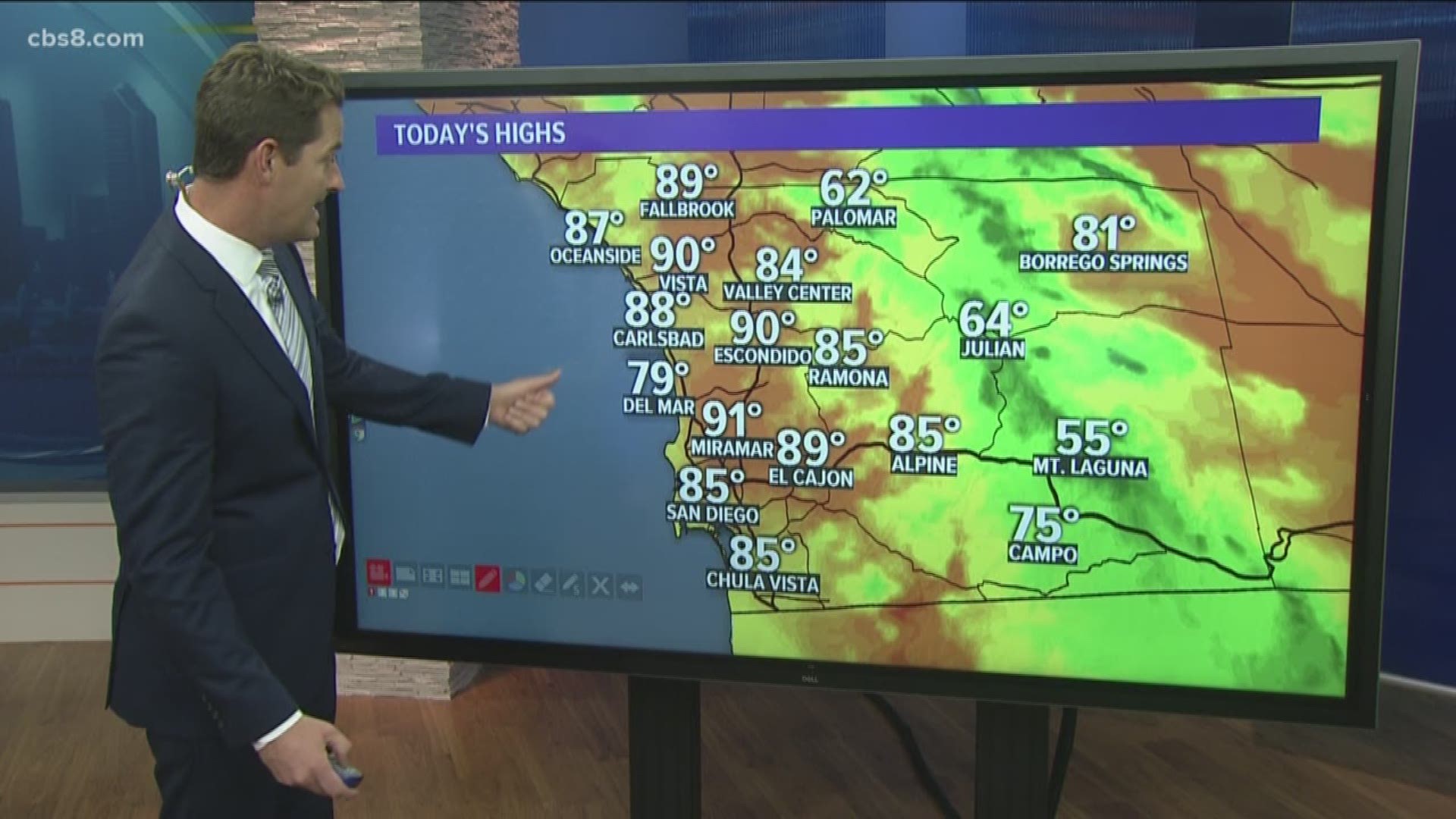 SAN DIEGO — Winds have dropped below Red Flag criteria Friday and will continue to weaken this evening.

The Red Flag Warning was allowed to expire at 6 PM. Very dry conditions will continue into Saturday.

Utility officials shut off electrical service to nearly 400 eastern San Diego County addresses Friday as a wildfire precaution as the first Santa Ana wind event of the fall continued for a second day.

The strategic public-safety outages were expected to remain in effect into the early evening, Jones said. To serve the affected customers, the utility company established a "community resource center" at Descanso Branch Library, 9545 River Drive, where water, snacks, cellphone charging and other services will be available through the day.

On Thursday, the National Weather Service issued a red flag warning, effective through 6 p.m. today, indicating a likelihood of critical fire weather in local mountain and inland-valley communities. The conditions stem from a ridge of high pressure settling near Yellowstone National Park in Montana, according to the federal agency.

Winds of 15-25 mph were forecast for the county mountains and valleys this afternoon, with isolated gusts as high as 45 mph, meteorologists said.

Cal Fire officials stressed the need for locals to take basic preventative steps, such as avoiding lawn mowing during high winds; steering vehicles clear of extremely dry vegetation, where sparks might touch off a blaze; limiting campfires to designated places; and looking out for suspicious behavior that could be arson-related.

The local threat level over the period was listed as "moderate," according to the Santa Ana Wildfire Threat Index, meaning any wildland blazes that might erupt could be "difficult to control."

High temperatures today could reach 80 degrees near the coast, 83 inland, 85 in the western valleys, 83 near the foothills, 75 in the mountains and 84 in the deserts.

Temperatures will increase slightly through Saturday, when the winds are expected to be much weaker, according to forecasters.

In response to the red flag warning, San Diego Gas & Electric this week alerted about 30,000 of its customers that it might have to suspend their electrical service at times over the period to reduce ignition hazards posed by power lines.

Based on improved weather conditions, however, SDG&E subsequently lowered its forecast Thursday afternoon of how many customers could be affected by preemptive power-downs to roughly 18,000 addresses.

SDG&E advised that it plans to provide updated notifications to customers within 24 hours of an anticipated power-down, and again within one to four hours of a shut-off, if possible.

The utility urged those who might received the notification to be prepared by making sure they have such emergency supplies as water, food, flashlights, extra batteries and cellphone battery packs.

As of late this morning, the fire-weather outlook was improving, with winds weakening across the East County, according to the SDG&E spokesman.

"Things are trending in the right direction," Jones said.