Power demand is forecasted to become even greater through Tuesday as temperatures plunge. 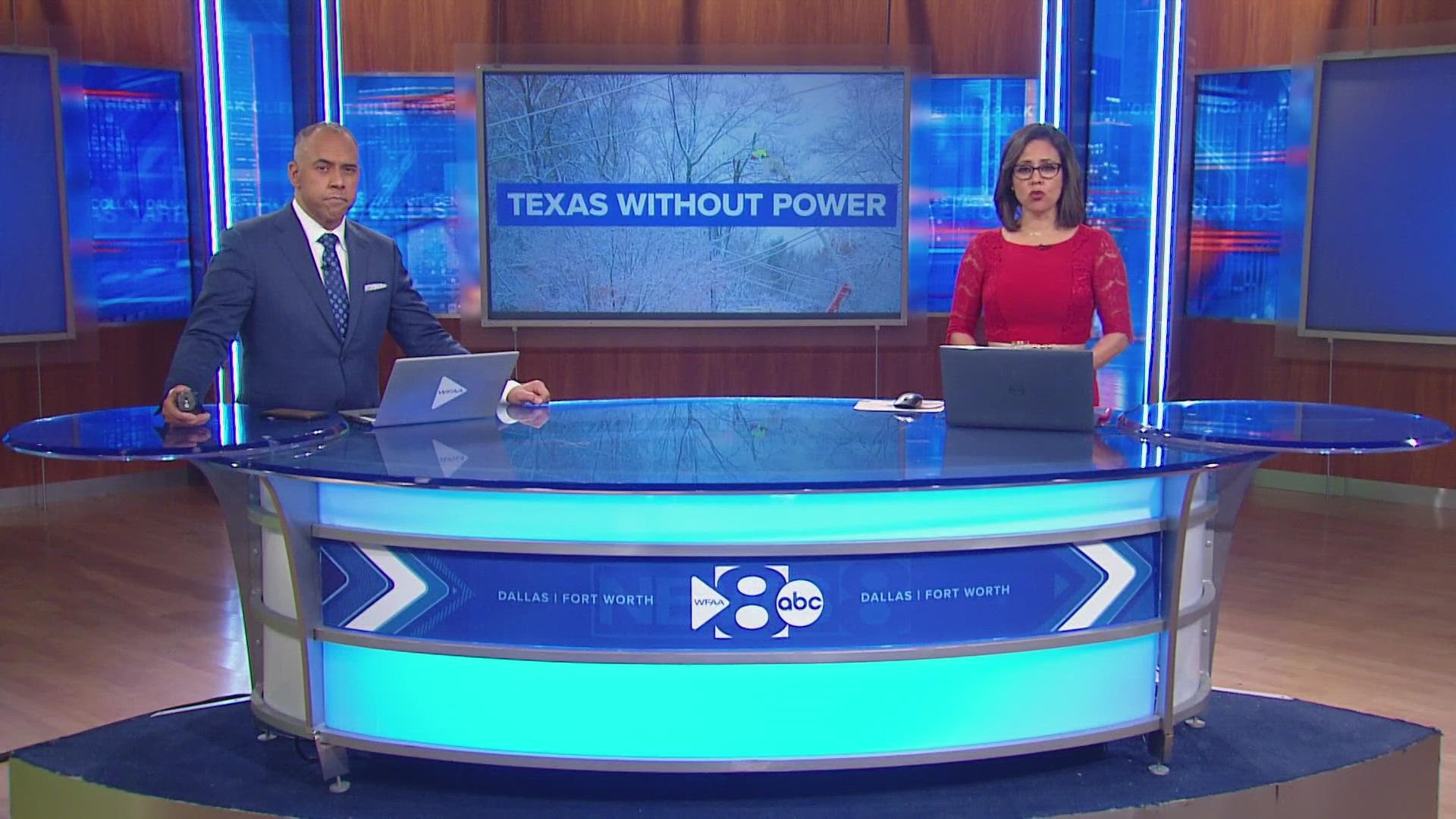 This story will be updated throughout the day as new information is released.

Rolling power outages are in effect across the state of Texas as officials work to conserve as much electricity as possible during extreme cold and record demand on the grid.

Officials say they are "necessary to maintain the reliability of the system."

Officials are asking Texans to conserve as much electricity as they can safely and reliably over the coming days as record-low temperatures are expected to plunge the state further into a dangerous winter storm.

Power demand is forecasted to become even greater through Tuesday.

ERCOT expects rotating outages to last throughout Monday morning and said they could be in place until the "weather emergency ends." The agency did not define what that would look like.

Remember to download the WFAA app to check one of our dozens of local radars near you as well as the latest forecast, cameras and current conditions. 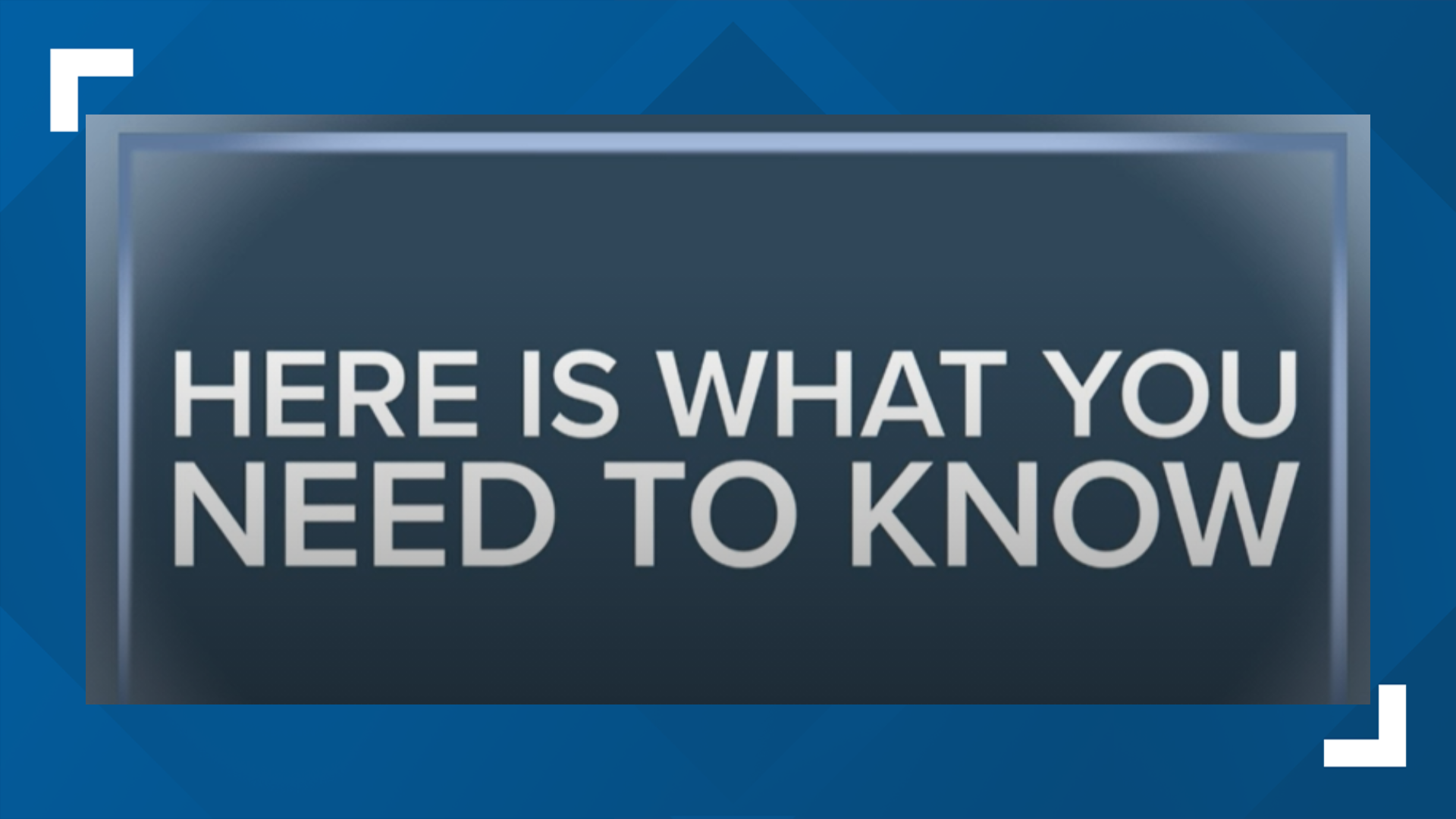 10:04 p.m.: Dallas Mayor Eric Johnson tweeted about his frustration with ERCOT late Monday night, saying the agency "needs to answer" for all of the outages Texans are experiencing.

I have been as frustrated as everyone else today. I know this has been extraordinarily difficult. These power outages are unacceptable, and ERCOT needs to answer for them.

Dallas County Judge Clay Jenkins also tweeted Monday night, saying that ERCOT has asked all transmission companies in Texas to shed an additional 2,000 megawatts of energy to customers, which would increase the number of outages in the area.

"We should discuss how Texas let this happen," Jenkins tweeted. "I understand your anger. I’m angry too. But tonight-right now- is about human and animal survival. Check on and help one another!"

The additional shed coupled with increased demand will likely increase blackout numbers and times.
We should discuss how Texas let this happen. I understand your anger. I’m angry too. But tonight-right now- is about human and animal survival. Check on and help one another!

9:20 p.m.: The winter storm could cause a loss of natural gas service to people's homes or businesses, ATMOS said Monday night.

ATMOS gave these tips on how to reduce your Take these steps to reduce energy usage now:

9:08 p.m.: Reunion Tower in Dallas will be dark Monday night. The tower will have all its external building lights and any other non-essential lights and electricity-consuming equipment turned off to conserve energy. This is only the third time Reunion Tower has gone fully dark, officials said.

8:50 p.m.: The Texas Department of Transportation (TxDOT) in Fort Worth is urging people not to travel unless absolutely necessary as the metroplex braces for another round of frigid temperatures Monday night.

Statewide, TxDOT has more than 2,300 personnel and 1,700 pieces of equipment deployed in response to the wintery conditions, officials said. Crews are continuing to work around the clock to plow, treat and monitor roadways.

TxDOT is also warning people that traffic signals and signage may be affected by the ongoing power outages, so drivers should use extreme caution and treat these intersections like four-way stops.

7:53 p.m.: Dallas County Judge Clay Jenkins has declared a state of local disaster for Dallas County. The declaration will last for seven days.

Jenkins enacted the following executive orders as a part of the state of disaster:

The order does not apply to essential businesses.

5:40 p.m.: The City of Fort Worth said Trinity Metro is suspending all transportation services for Tuesday, Feb. 16. There will be no bus, rail or on-demand service.

5:00 p.m.: Dallas County Judge Clay Jenkins tweeted that Oncor's attempt to restart rolling blackouts in affected neighborhoods to those that are currently with power have been unsuccessful due to the status of the power grid. He tweeted, "If you have power, please consider taking in those without power before dark."

4:45 p.m.: ERCOT said it has restored power to at least 500,000 households as of 4 p.m. Monday. The company said it's working nonstop and controlled outages will still likely last throughout Monday evening and into Tuesday.

4:40 p.m.: City of Plano said due to the winter storm, several power plants are down -- which has caused a delay in restoring power to residents. The City is asking residents to shelter in place and to "be prepared to wait this out." There is no restoration time for power.

4:30 p.m.: MedStar said as of 4 p.m. Monday, its responded to 351 EMS calls. Of those calls, 64 were related to power outages, 28 concerned hypothermia with 10 people transported to local hospitals.

3:35 p.m.: The Red Oak Police Department said it City has established a 48-hour warming shelter in the old ROISD Junior High Gymnasium at 200 Live Oak Street in response to residents being without power for several hours. If you decide to go the the gym, you're asked to followed COVID-19 protocols. You may also bring food, blankets and your pets in a kennel.

3:20 p.m.: Gov. Greg Abbott tweeted that about 200,000 residential customers are starting to get their power back as of about 3 p.m. Monday, and more are expected "in the coming hours." The governor did not specify where those people are located.

Of those calls, 57 were related to power outages, people cold or running out of oxygen, while 25 were hypothermia calls with nine people transported to area hospitals. A warming shelter open at 3551 New York Avenue in Fort Worth.

1:45 p.m.: Gov. Greg Abbott said he has been in constant communication with electricity officials as the state faces massive power outages during the extreme cold freezing power creation apparatuses at coal and natural gas facilities.. He will provide an update to Texans later today.

"Many power generation companies facilities froze overnight and shut down their ability to generate power," he said in a tweet. "They are working to get power back on line."

Abbott added that they will be prioritizing residential electric consumers as they work to bring power back online.

11:45 a.m.: First responders in Fort Worth have responded to more than 200 EMS calls so far Monday, which is 36.7% more than the same timeframe last Monday.

Dozens of the calls have been related to the power outages, with hypothermia and oxygen device issues being some of the primary concerns. Nineteen people have been treated for hypothermia, officials said.

MedStar has responded to 201 EMS calls so far today, 36.7% more calls than the same timeframe last Monday. 41 of the responses related to power outages; hypothermia and patients who's oxygen devices are not working without power. 19 patients have been treated for hypothermia.

11:35 a.m.: ERCOT officials said there’s no limit to how long any one outage could last. It could be many hours, and it’s up to each provider to figure out where and how long the rotations are.

11:15 a.m.: State electricity officials said rotating and controlled outages will continue through Tuesday as around 2 million people are without power currently.

The controlled outages will last longer than typically done because of the magnitude of the situation, officials said. That's why some people are seeing their power remain off for extended periods of time.

Officials explained that some areas near points of critical infrastructure like hospitals will likely not experience the same kind of outages as providers work to keep the power on for those specific areas. This in turn means that they will rely more heavily on other areas for the outages.

Most of those that went offline were natural gas, coal or nuclear facilities that shut down. Combined, it in total took more than 30,000 megawatts from the grid.

This is the longest period of time officials have had to run rotating outages in the state.

10:30 a.m.: ERCOT officials held a media call and began answering questions about the power situation at about 11 minutes into this video.

9:25 a.m.: Texans were initially told to expect to lose power for 15 to 45 minutes, but that has now been "significantly extended," Oncor officials tweeted out just after 9 a.m.

"Outages due to this electric emergency could last for hours & we ask you to be prepared."

The energy provider said it is also responding to outages caused by the winter storm itself.

9 a.m.: More than 1.14 million Oncor customers were without power across Texas, with more than 6,900 outages in effect. That's about 30% of the company's total customers.

7:15 a.m.: Sachse police non-emergency phone lines are down, officials said. They are asking those calling for non-emergency purposes to use 972-496-6229 instead. For emergency calls, still dial 911.

7 a.m.: Many people across Dallas-Fort Worth have been experiencing rotating power outages since 1:25 a.m., but some have been consistently without power for hours.

Officials are urging anyone who's experienced an outage longer than two hours to contact their service provider. Some customers have reported difficulty reaching providers like Oncor to report outages via phone or website. Multiple attempts may be required.

If you've been without power for more than 2 hours, officials are urging you to contact your provider to let them know about the outage.https://t.co/yC0K6Fi6Z4

6:45 a.m.: Officials with the Tarrant County Sheriff's Office are asking people to avoid calling 911 to report a power outage unless they are experiencing an emergency and need police, fire, or medical assistance. To otherwise report an outage, people should contact their electrical providers, officials said.

6:30 a.m.: More than 1 million Oncor customers were without power across Texas, with more than 5,800 outages in effect.