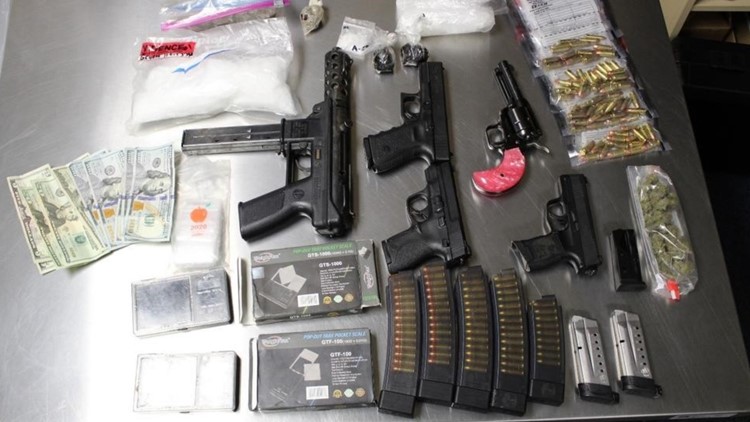 TOM GREEN COUNTY, Texas — A routine traffic stop over the weekend led to the arrest of a San Angelo man, who was transporting a large amount of illegal drugs, as well as firearms.

The driver of the vehicle was identified as Michael A. Meza.

During the roadside interview, several indicators of possible criminal activity were observed by the deputy. A San Angelo Police Department K-9 was requested and responded to the scene. An open air search around the vehicle was conducted and the K-9 alerted to the presence of an illegal substance, the press release stated.

During a probable cause search of the vehicle, a large amount of illegal drugs were found, along with five firearms, associated ammunition and magazines.

Illegal substances found during the vehicle search were: 529 grams of methamphetamine; 51 grams of black tar heroin; 52 grams of heroin; 22 grams of cocaine: and 19 grams of marijuana. Investigators also found $690 in U.S. currency.

Meza was booked into the Tom Green County Jail.

In the release, the Tom Green County Sheriff's Office said it is appreciative of the assistance from the San Angelo Police Department in the use of their K-9 for this significant seizure in taking illegal drugs off the streets of Tom Green County.